Portia's pain - 'It hurt most when they said I couldn't read' 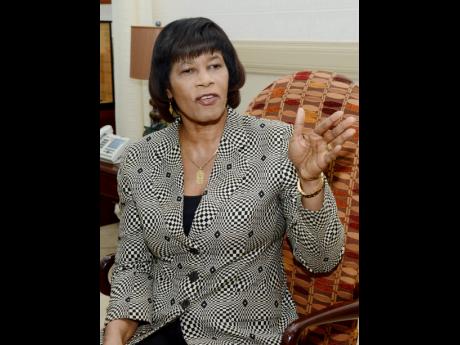 File
An animated Simpson Miller during an exclusive interview with The Sunday Gleaner last week.

Prime Minister Portia Simpson Miller claims that she has endured political pain and personal hurt on her every step during her 10-year reign as president of the People's National Party (PNP).

In an exclusive interview with The Sunday Gleaner last week, Simpson Miller admitted that some comments directed at her during her nearly five-decade-long political life, especially during the periods of contests, hurt her deeply.

Claiming she bears malice to none, Simpson Miller said she has weathered the storm but some criticisms have cut to the core despite the political toughness which comes with the territory over time.

"I don't allow anyone to make me cry. I would be disappointed. Upset. But you are not going to get me to cry, because I know where I am coming from and I know where my parents are coming from.

"The way I was brought up does not allow me to pay too much attention to evil. So whatever is evil, I leave it aside. I deal with it by praying to my God," said Simpson Miller.

According to Simpson Miller, one barb which hurt her most was "when they said I couldn't read".

Other comments from colleagues and members of the public also hurt the woman who has displayed toughness since she entered the political arena in the 1970s.

"I heard that I was dying (from cancer). I heard I was bleaching, and I wonder if I could bleach my entire body. But if my mother was alive and you walk in here, you would think that Sandrea (Falconer) is her child, not me. I heard that I was wearing a wig and I had a big chop in my forehead," said Simpson Miller, who later launched into several exercises showing how physically fit she is.

When asked if she was suffering from dementia or Alzheimer's, which are the latest rumours surrounding her health, Simpson Miller laughed loudly.

"That's why I remember that I was born in Woodhall, and my mother's name was Ethlyn Tullouch, and my father's name Zedikiah Simpson. They are just praying that something would happen," said Simpson Miller as she reeled off a long list of relatives, including her grandparents and their parents, in a convincing show of her long-term memory.

According to Simpson Miller, much of the criticisms levelled at her was not because she is female, but because she had the wrong colour, address and social class.

"Had my mom been the Portia, she would have been loved and respected. She would have had the right colour, the right length hair, but the poor black gyal from Woodhall must go through some things," argued Simpson Miller.

The PNP president charged that despite the biting comments aimed at her during the two internal leadership contests in 2006 and 2008, the differences were quickly set aside.

"It wasn't difficult for us to heal the wounds, and that happened quickly. Burchell Whiteman is still one of the most dignified Comrades there is. My own personality would have assisted as well, because I am not someone who holds malice, and it's clear for the country to see.

"Just look at my Cabinet. I did not appoint only the persons who supported Portia. I appointed people from all divide in the party to serve in the Cabinet of the country."

For Simpson Miller, assisting a Jamaican from any walk of life is second nature to her, and that made it easy to embrace non-supporters in the PNP.

"For me, if I should leave here now and I see someone in green clothing and a green armband (suggesting a supporter of the Jamaica Labour Party), that would not prevent me from stopping to find out if I can help.

"That is who I am. That is how I was raised," said Simpson Miller.