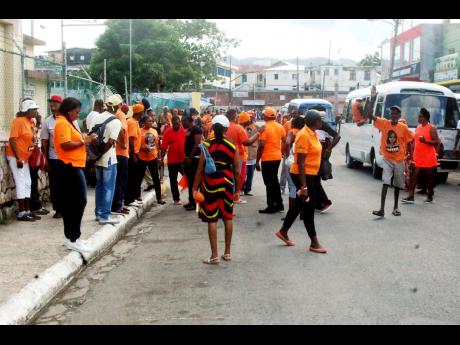 Adrian Frater
There were too many Comrades for the buses ready to travel to Half-Way Tree, St Andrew yesterday for the People's National Party mass rally. 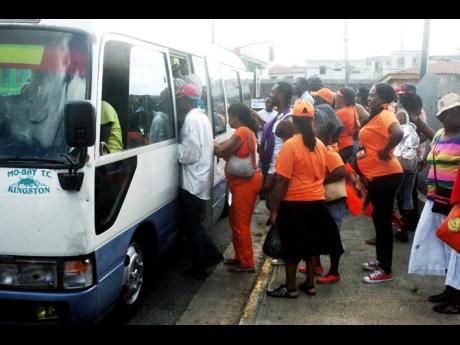 Adrian Frater
There were too many Comrades for the buses ready to travel to Half-Way Tree, St Andrew yesterday for the People's National Party mass rally.
1
2

It was a case of too many Comrades for the buses yesterday in Central St James as enthusiastic People’s National Party (PNP) supporters turned out in huge numbers to make the trek from Montego Bay to the party’s mass meeting in Half-Way Tree Square, St Andrew.

“Our plan was to send nine buses, but, as you can see, we are now up to 15 buses and we still need more buses,” said businessman Junior Taylor, one of the party’s organisers for Central St James.

“I have not seen this type of energy in a long time ... . The Comrades are enthusiastic and ready.”

The buses were originally slated to leave Montego Bay at 2 p.m. but, based on the last-minute arrangements to get more buses, the caravan of orange-clad PNP supporters, with their blaring vuvuzelas, did not leave the western city until after 3 p.m.

“Me haffi mek it to Half-Way Tree today, because me know Sister P (Prime Minister Portia Simpson Miller) a go call it (the election) ... . Central St James ready ... . You nuh see how we look good?” said Olive Smith, who describes herself as a “heavy-manners” socialist.

“We need to put the elections behind us so we can continue with the progress.”

AREAS YET TO HAVE RALLY

Unlike Smith, some Comrades said they did not believe an election date would be announced, as, according to them, the prime minister has not yet tested the pulse of Comrades in other parts of the island.

“We nuh have no meeting a Sam Sharpe Square yet ... . We nuh go to Annotto Bay yet ... . I know Sister P ready, but she have to energise the whole island before she call it,” said Steve Hemmings.

“However, it nuh matter what time she call it, a PNP a win ... . The PNP has never had a one-term government and it is not going to happen this time.”

At one time during the last-minute preparations to get more buses, the situation got contentious when some Comrades openly began to bad-mouth Central St James Member of Parliament Lloyd B. Smith, who has been replaced in the seat by attorney-at-law Ashley-Ann Foster.

“Lloyd B not even provide one bus ... ; it is a disgrace ... . It is his constituency until the elections are over and a new MP is in a place,” said an obviously irate Comrade.

“Me neva like him from morning ... that is why we glad seh dem kick him out.”

The new candidate, who is just 27 years old, is reportedly quite popular on the ground with young voters. She will be challenged by the Jamaica Labour Party’s (JLP) Heroy Clarke, a businessman who has strong roots in the constituency.

In the 2011 general election, Clarke lost a close race to Smith.