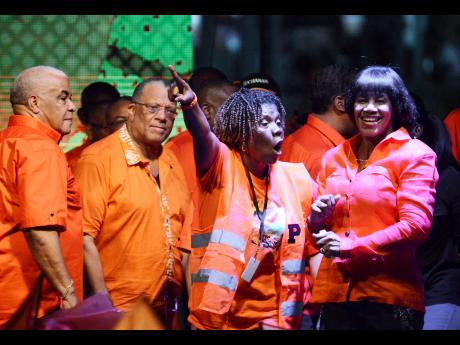 Prime Minister Portia Simpson Miller last night dramatically summoned Jamaicans to cast their ballots for a new Government on February 25, the 10th anniversary of her ascension to the position of president of the People’s National Party (PNP).

After a spirited, hourlong presentation heralded by fanfare, the climax came when Simpson Miller announced that nomination day will be Tuesday, February 9.

“We invite you, the people of Jamaica, to walk with us into another term,” declared Simpson Miller. “One good term deserves another.”

In a wide-ranging address during which she urged Jamaicans of all political persuasions to embrace Jamaica’s excellence, the prime minister, the only public official empowered so to do, declared that she has asked Governor General Sir Patrick Allen to dissolve Parliament this Friday, February 5.

If there was a smidgen of doubt the trumpet would have sounded during last night’s mass rally, this was disposed of by early afternoon. The massive throng that had assembled from early afternoon had seen to it.

It was apparent that Simpson Miller and her team had pulled out all the stops to change her fortunes at the famed Half-Way Tree Square where she flew the gate in 2007, in her first stint as prime minister.

The stage was well set for the announcement that had set the nation on edge. Comrades were clearly whipped into a frenzy. The fever had reached delirium levels long before the first speaker took the stage.

The excitement was palpable, triggered, in part, by the sounds of vuvuzelas, dancehall music blaring, along with the unadulterated cheers of expectant Comrades.

With the security forces on high alert, accompanied by guard dogs, an initial gate was flown and a tsunami of orange swept in front of the stage on which Simpson Miller would make the much-anticipated announcement.

NOT AN ORDINARY POLITICAL RALLY

Thousands of orange flags danced in the light breeze in front of the PNP platform, adorned by a backdrop bearing the campaign theme ‘Step-up the progress ... securing a better Jamaica’, and photographs of high-profile Comrade candidates.

It was a night when Comrades ­ not just the young of heart, but many of older vintage ­ were out in their numbers, another demonstration that it was not an ordinary political rally.

Simpson Miller did not disappoint, as frenzied Comrades welcomed their leader with the catchy refrain, “Forward, Portia”, followed by a medley of party songs.
After being strategically introduced by campaign director Dr Peter Phillips, Simpson Miller took centre stage at 9:20 p.m.

“I am pressing on the upward way ... . Lord, plant my feet on higher ground” was her opening quote, with the familiar line, “Are you ready?”

Then, when she declared: “Tonight is the night that I will sound the trumpet,” Half-Way Tree Square literally erupted.

“We are a country on a mission,” she declared. “Tonight is a glorious night. I will put some people out of their misery.”

But then Simpson Miller declared: “Tonight is a serious night.”

As others did previously throughout the evening, Simpson Miller went into a litany of the successes and accomplishments of the PNP administration.

She asserted that the PNP Government was expanding and reinforcing the socio-economic infrastructure.

“If you want to keep Jamaica up in prosperity, stay with the People’s National Party,” she declared.

In making her case to the Jamaica people for another term, Simpson Miller ventured down into the accomplishments of past presidents.

Asserting that it was the responsibility of this administration to achieve economic independence, she said: “I, Portia Lucretia Simpson Miller, vow to take the nation to economic stability.”

Charging that the Jamaica Labour Party (JLP) took the country on a roller-coaster ride, she asked: “Do you want to go back there?”

Simpson Miller acknowledged what she described as the hardships borne by Jamaicans but asserted that the country was moving past the worst.

“I want to thank you ... . For this reason, I dedicate Jamaica’s success to the people of this country,” she said.

Highlighting what she called “progress”, she listed the completion of highways, with brand new ones to come; call centres; agro parks and small business initiatives as signs of development.

Responding to critics of her leadership style, Simpson Miller said there was nothing to gain from being firm with members of her team in the public domain.

She also scoffed at claims that she was missing in action, saying the accomplishments of her Government suggested otherwise.

Simpson Miller also urged Jamaicans to refrain from violence during the election campaign.

“There is no need for it. I am committed to a peaceful campaign ... . We are one Jamaica.”