JP White gets another vote of confidence from PNP 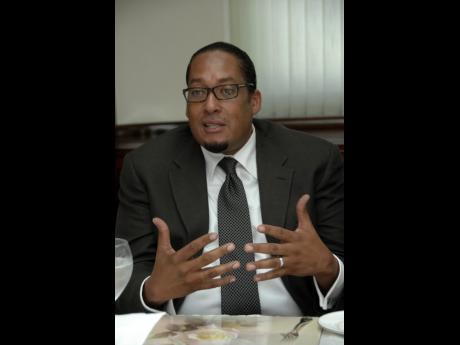 The People's National Party (PNP) has extended yet another vote of confidence to its candidate for Northern Trelawny in the upcoming polls, John-Paul White, whose multimillion dollar tax debt found its way on the campaign trail, in the aftermath of the selection brouhaha.

Franklyn, during a press briefing, echoed Burke's claim of documentary proof, but the release, urged by Burke on Tuesday, of the documents to substantiate claims that the debt of $17 million is being, or, has been repaid, has not been forthcoming.

Franklyn emphasised that there has been no special intervention by anyone on White's behalf.

"He conducted, along with persons representing him, the negotiations with Tax Administration Jamaica (TAJ)," he said.

White's political path has been anything but smooth as his tax troubles came to light two weeks after his car was damaged by hoodlums in Trelawny's capital, Falmouth.

Franklyn told journalists during the press briefing that White, the principal of a project-management company Equilibrio Solutions Jamaica Limited, has started to pay down the outstanding debt.

"As a principal of a registered company in Jamaica, that company is required to make its returns as any other company to the TAJ," said Franklyn.

The sum of some $17 million is owed to the TAJ by Equilibrio.

Franklyn said it has been the subject of continuous dialogue and discussions, as with many other business persons in Jamaica, between the company and its principal and the TAJ.

"As a consequence of which, the TAJ wrote to the company a latter dated January 28, 2016, which is deemed a demand letter," said Franklyn. "This is a letter which you can get if there is found outstanding (sums) to be paid to the TAJ."

Added Franklyn: "Subsequent to that the dialogue and discussion between the company's representatives and the TAJ continued and a payment plan was arrived at."

He said this involved the payment of a principal sum, with the balance to be paid on a monthly basis over an agreed period.

"White and his company have satisfied the payment of that principal sum and White has given the assurance that his company will live up to the monthly agreed payment until the sum of $17 million is liquidated," said Franklyn.

In White's defence, Franklyn said the TAJ exercised a right which it has extended to many business persons in Jamaica having to do with the payment of tax obligation.

"We have seen documentary evidence of the letter of demand and payment plan which have been agreed upon. We are aware of the payment of the principal sum, and we remain assured that our candidate will live up to the expectations and the agreement to pay the monthly sum until its is liquidated," said Franklyn.

Franklyn also reacted to a suggestion that the issue could pose a public-relations nightmare for the PNP, which is in campaign mode for the February 25 general election.

"It is an issue that has to be dealt with, but certainly it is not a nightmare," he said.

"It is something that we have been dealing with in the course of the campaign."