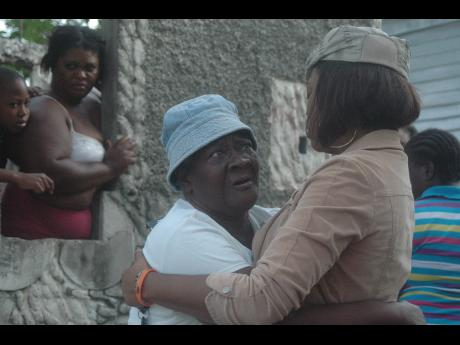 Contributed
This elderly woman (left) shed tears for her son, who is now battling for life after being shot in Salt Spring. 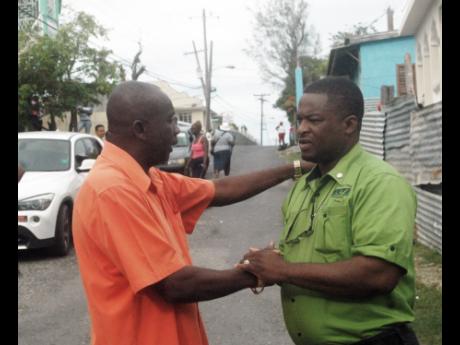 Meggie Top in Salt Spring, St James, is now a community in mourning as residents struggled to come to grips with Tuesday night's brutal murder of three residents who were slaughtered in a bar/nightclub by 10 marauding gangsters who came armed with AK47s, M16 assault rifles and shotguns.

THOUGHT SON WAS IN BED

"I heard all the shots, but I did not know my son was out there. I thought he was in his bed," said Zenie Barrett Edwards, the elderly mother of Foster.

A businessman, who resides a short distance away from the bar/nightclub, said the assault was ferocious and that he fled his house out of fear that it might have come under attack.

the man, who asked not to be identified.

"When I heard this morning that is only three people died, I was very surprised ... . I thought everybody in the bar was killed."

'Based on our preliminary investigations, we believe that this shooting is the work of gangsters operating in the area ... there has been a long-standing feud going on in the community and we believe this has something to do with it," said McGregor. "We have the names of some persons who we would like to speak to in regards to this incident and we will be releasing their names and asking them to turn themselves in."

However, McGregor noted that based on information he has received, some of the men, who he wants to turn themselves in, have already made it clear that, "if the police want them, the police will have to come and get them".

A woman who witnessed the gunmen making their way towards the bar/nightclub described them as ominous-looking in their mostly dark-coloured clothing with masks over their faces.

"A just pure big gun ... . Some of the gun dem taller than me," said the woman, who was visibly shaken.

The mother of a man who was shot and injured in the incident, but survived, was particularly traumatised by the incident as it evoked memories of a similar incident some five years ago when she lost two sons in a gun attack in the community.

"This is too much ... . Five years ago, they kill two of mi sons right in front of my face and now this ... . How much can one woman endure?" said the tearful woman.

"Since man cannot control these heartless killers ... I am begging and pleading to God to intervene."

The Reverend Everton Jackson, head of the Peace Management Initiative West, told The Gleaner that the incident was a major blow to the efforts of his organisation, which has been working to reduce the long-standing tension, that has been plaguing the community.

"It is a known fact that there is some amount of tension in the area, but we have been working diligently with the people to put an end to the senseless killings ..., we had even planned a peace march in the community for next Wednesday," said Jackson.

"While this is a big blow, we cannot give up on the people ... . We just have to keep on working and hoping that we will achieve our goal of creating a lasting peace."

The latest killings bring the St James murder count for 2016 to 14, which makes it the most murderous parish in island so far this year. Last year, the 215 murders recorded in St James was the highest islandwide.