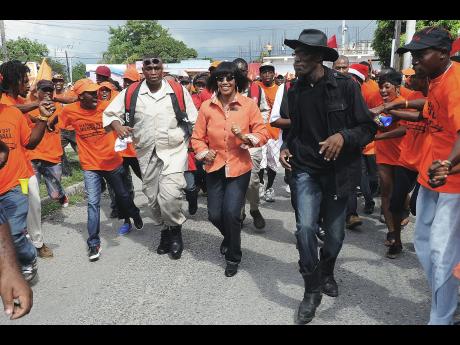 File
Portia Simpson Miller (centre), president of the People's National Party, outruns her security detail and supporters ahead of being nominated as the party's candidate for South West St Andrew, on December 12, 2011. 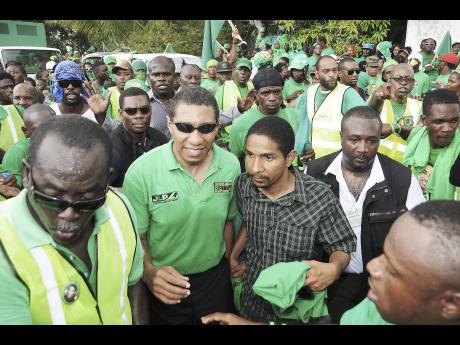 File
Andrew Holness (second left), leader of the Jamaica Labour Party, surrounded by security personnel and supporters ahead of his nomination as the party's candidate for West Central St Andrew on December 12, 2011.
1
2

The two major political parties are confident that no additional surprises will be sprung when their representatives and supporters venture into the 63 constituencies across Jamaica today to nominate their standard-bearers.

After two eleventh-hour changes were made, one each by the People's National Party (PNP) and the Jamaica Labour Party (JLP), both are insisting that no additional alterations are on the cards and that they are raring to go.

The JLP has replaced Peter Abrahams, who withdrew late last week as the party's standard-bearer in North Central

"We are overwhelmingly well-prepared," he declared, even as he refused to countenance another last-minute change in the line-up.

Phillips staved off queries on Western Portland standard-bearer Lynvale Bloomfield after reports surfaced that his account with Tax Administration Jamaica was in arrears.

Phillips issued a stern warning against politicising the issue.

"I am not in a position to discuss anybody's specific tax issues," he said. "As minister of finance, I have never gone to explore any individual's taxpayer situation that has not come to my attention, by virtue of my ministerial obligations."

He added: "I believe that if we walk down that path, it is a slippery slope which brings all of our institutions into disrepute."

Phillips continued: "At some point, we have to abandon this course where we believe that it is appropriate to mash up the country that we all want to live in, destroy its political institutions for the sake of political advantage for one person or another. Time come to stop that now." Robert Montague, the JLP chairman, was just as gung-ho, despite a fatal shooting that marred the party's rally in Montego Bay, St James, on Sunday night.

According to the police, five persons were shot, three fatally, in the incident which occurred during the rally at Sam Sharpe Square.

Montague said the JLP remained even more determined after the tragedy.

"We have 63 candidates. They are all in place, they have all checked with the Electoral Office of Jamaica, they have got their instructions from the party, they are ready and they have got specific times," he said.

Montague told The Gleaner that, based on the arrangements, he expected all 63 JLP standard-bearers to be nominated by 1:30 p.m.

"We are satisfied with the arrangements. Where we had issues, we have worked with the Electoral Office and the police to resolve those issues across the island," he said.