PNP says national broadcasts are not substitute for debate participation 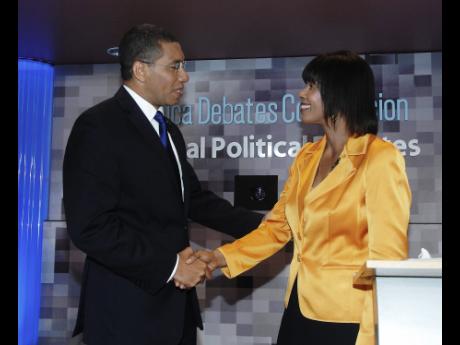 File
Andrew Holness, prime minister at the time, and Portia Simpson Miller, then opposition leader, greet each other ahead of the leaders debate during the run-up to the 2011 general election.

THE suggestion that a series of national broadcasts planned by the People's National Party (PNP) is a substitute for its participation in the national political debates was yesterday rebuffed by the party.

"This is a normal part of communicating the party's message to the voters, telling our own story of the last Government and our plans for the future," Dr Peter Phillips, PNP campaign director, told The Gleaner.

The PNP will, leading up to the February 25 general election, air nine national broadcasts, which will be delivered by select portfolio ministers. Five of the broadcasts are to be delivered this week and four next week.

The party has said that the subject and speaker for each broadcast will be released 24 hours ahead of airtime.

The first broadcasts are expected to be delivered this week by Minister of Youth and Culture Lisa Hanna, Minister of Education Ronald Thwaites, and Minister of Tourism and Entertainment Dr Wykeham McNeill.

Phillips has said that the broadcasts will provide the ministers with a platform from which to speak directly with the electorate.

However, Mike Henry, campaign director for the Jamaica Labour Party (JLP), has questioned the source of funding for the broadcasts.

"The nine national broadcasts, we are not sure if they are being funded by the Government or by the PNP. They have resources," he said

Henry also argued that should the PNP decide not to participate in the debates, the JLP would use the dates to deliver its message through broadcasts to the public.

The PNP has said that it will respond to the Jamaica Debates Commission regarding its participation in the debates today.