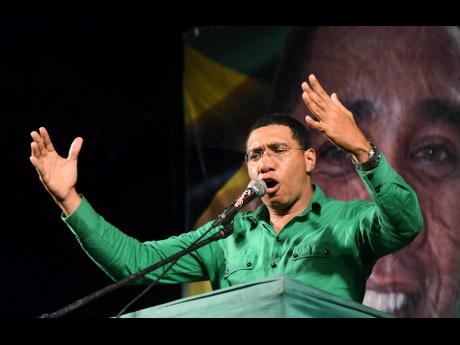 Opposition Leader Andrew Holness has provided details on the funding of his multimillion-dollar house in Beverly Hills, St Andrew, in an attempt to respond to a smear campaign he says the People's National Party (PNP) is waging against him in the lead-up to the February 25 general election.

Holness yesterday issued a late-evening statement disclosing that "to date the total cost of land preparation, construction and landscaping is approximately J$52 million spent over a period of four years, financed by savings, salary, bank loans and suppliers' credit."

Finance Minister Dr Peter Phillips has been heading a PNP court since November 2015 that questioned Holness' financing of his home, indicating that it might not stand up to scrutiny.

But Holness has sought to dismiss much of the speculation in a statement that chronicled the building process, his sources of funding, and how he became director of ADMAT, the St Lucia-registered company that purchased the land on which his mansion is built.

The Jamaica Labour Party (JLP) leader said the company was formed after he became education minister in 2007, and a need to structure his "personal affairs".

"Consequent on that advice, I incorporated an international business company in St Lucia. This course of action is common practice, particularly for estate-planning purposes. The name of the company, ADMAT, is a combination of the names of my two sons Adam and Matthew. I am the sole director of the company and the company has three shareholders, being my sons, and myself," the statement read.

Holness, who has also faced disclosure calls from the Trevor Munroe-led National Integrity Action, said ADMAT was registered in 2008 and declared to the Integrity Commission, a creature of the Jamaican Parliament to which all members must make declarations of incomes, assets and liabilities.

"Everything I own is physically in Jamaica," Holness said before going on to outline how funds were sourced for land purchase and subsequent construction of the house. "In late 2010, I started negotiations to purchase a piece of land to construct my family home. In January 2011, I made the first of four payments on the land. Payments were completed in August 2011. The title was transferred in July 2011."

Holness is denying making the notation "signed while on a visit to Jamaica" on the document. That's a claim Phillips levelled and questioned at a PNP rally in Manchester on Sunday. Even if that notation was indeed made, attorney-at-law Patrick Bailey says it would not be "unusual" as Jamaica's Titles Office gives different variations on how this can be captured, including the use of the words "witnessed in Jamaica" or "witnessed while on a visit to Jamaica".

Meanwhile, Holness has acknowledged that he is now indebted by the purchase of the house and land. He explained that he used money from accounts held at the Jamaica Money Market Brokers and Stocks & Securities to finance the purchase of the Beverly Hills property, as well as loans throughout the construction phase.

"In September 2012, we began preparation of the site for construction, which involved excavation of boulders and fragmentation of rocks. The resulting stones from this process were used to construct retaining, facing and boundary walls. This initial phase was financed from my savings, salary and suppliers' credit of approximately $3.8 million." Overall, he said, those activities cost approximately $8.6 million.

Holness said the second phase involved the erection of the structure during 2013 at a cost of approximately $35 million. He notes that financing came from a $10-million home improvement loan from the Bank of Nova Scotia, a $3-million mortgage from Jamaica National, and suppliers' credit of approximately $15.6 million.

"My wife, being a real-estate developer, has established credit lines for the supply of construction and building material and equipment rental. The suppliers' credit came from this source. In 2014, we completed all major construction and in that year spent approximately $9 million financed by salary, savings and suppliers' credit. In 2015, there was no significant construction activity, as the project was substantially complete.

"Currently, I am servicing debt repayments to the banks and to suppliers. All of this has been declared in my annual integrity reports which have been filed within the statutory time frame," the 43-year-old said. He added: "My report for the year 2015 will be filed by March 31, 2016 as required by law," an indication that he will not yield to the PNP's demand to publish his finances nine days before the election.

The PNP had demanded that Holness explain how he was financing his house, among several conditions for the party to participate in the national political debates. "I have now met the demands of the People's National Party. I look forward to debating Mrs (Portia) Simpson Miller soon," Holness asserted.

Responding to the developments, Phillips told The Gleaner: "When we get the statement, the campaign team and the party will study and issue a statement."