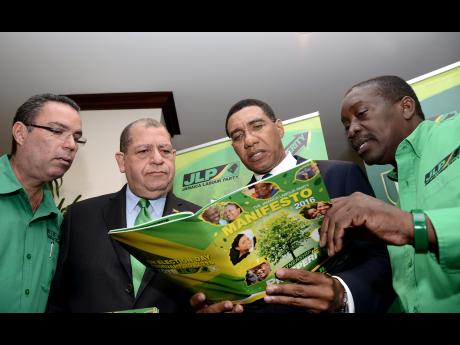 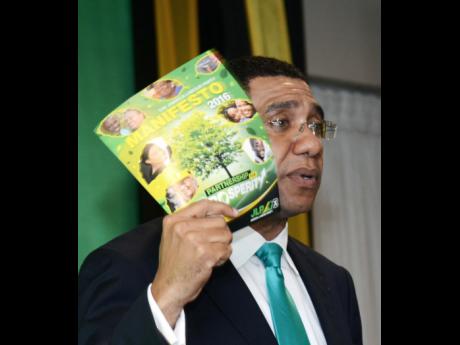 "In describing our manifesto, I would say that it is credible, realistic, practical, and bankable," Holness said, in the presence of his long-time mentor, Edward Seaga.

Scripted in easy-to-comprehend language, the manifesto launched at The Jamaica Pegasus hotel was the party's much-rehearsed 10-point plan.

"The partnership is about improving your life," Holness told the gathering. "Our mission is to grow our economy to create jobs that put power and independence in your hands to fulfil your dreams."

The highly touted tax-reform proposal that incorporates the lifting of the personal income tax threshold to $1.5 million for some persons was featured in the manifesto.

Other areas of focus in the 47-page document include job creation, education and development, housing, water, and transport. The manifesto also draw attention to the JLP's plans for environment and climate-change mitigation, tourism, and agriculture and fisheries.

"You can place your vote on this manifesto," declared Holness. "And as we are talking about placing your vote, the 25th of February is payday."

Jamaicans will vote for a new government, ending months of jostling between the JLP and the People's National Party (PNP) for the right to form the next government.

"It will also be a very historic day," declared Holness. "The people of Jamaica will go to the polls to determine the direction of the country for the next five years."

Holness said that there was a distinguishable difference between the JLP and the PNP: "It all boils down to one thing: the PNP believes in poverty and the JLP in a shared prosperity."

He said that the manifesto had been crafted to create a peaceful and productive environment in which to do business, raise families, retire, and enjoy life.

The manifesto states that corruption impedes economic growth, undermines the rule of law, and tears down the fabric of society.

"We are committed to the establishment of internationally acceptable standards of good governance," is one of the assertions in the manifesto.

There is also an undertaking to make public security a national priority by committing a minimum percentage of the national Budget to fight crime.

The JLP has promised to ensure that every student achieves full literacy and numeracy by the end of primary school.

In the area of health, the JLP promises to eliminate political interference in the appointment of regional and hospital leadership by setting up a committee of stakeholders in the sector.

"We have been consulting you," said Holness. "We have been going around the country, and we have heard your voice, your concerns, your vision for Jamaica's development."

"We have been consistent in our theme in getting the average Jamaican to be prosperous since the founding leader, Alexander Bustamante, started on this pathway."

JLP Campaign Director Mike Henry said that issues highlighted in the manifesto would enhance its campaign.

According to Henry, the JLP started campaigning after the PNP's Dr Peter Phillips sounded the alarm that the date was nigh in Clarendon late last year.

"Having called the date, the prime minister has been running ever since," said Henry, "and she continues to run away from a debate which is on the issues."