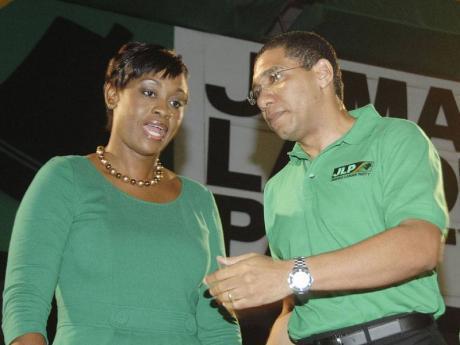 The wife of the Leader of the Opposition Juliet Holness and her brother Stephen Landell have filed a lawsuit against the Minister of Finance and Planning Dr Peter Phillips  and four others arising from what they described as false,  malicious and defamatory statements made against Mrs Holness twice this month.

1. Omar Newell, a PNP executive member; the general secretary of The Patriots, the PNP Region II  secretary and operator of a twitter account

2. Dorothy Buchanan, the operator of a Facebook account, a PNP sympathiser  and the mother of PNP St Elizabeth South West, Hugh Buchanan

3. Kadia Francis, the operator of a Facebook account special assistant to Arnaldo Brown at the Ministry of Foreign Affairs and Trade

Attorney-at-law Chukwuemeka Cameron who is representing the claimants explained that it was not just an ordinary libel suit that was filed but it is also a claim in which declarations are being sought from the court to protect the rights of citizens to  free and  fair elections.

Mrs Holness is seeking several declarations, one of which is that, by publishing  the untrue statement Dr Phillips created conditions that are not conducive to the attainment of free and fair elections.

She is also seeking an injunction to bar the defendants from making any further alleged defamatory comments.

The suit stemmed from comments allegedly made by Dr Phillips at  presence conference held by the  People's National Party on February 12 and at a mass rally in Manchester on February 14.

Mrs Holness, a real  estate developer,  is a Jamaica Labour Party candidate for St Andrew East Rural in the general election on Thursday.

The claimants outlined in court documents that the defamatory remarks by Dr Phillips were made in relation to his call for the Leader of the Opposition to disclose  to the public, the source of the funds for the construction of his Beverly Hills mansion.

They said Dr Phillips knew that the media would be present at both meetings  and therefore it was natural and foreseeable that the said words would be published in the electronic and published media.

They contend that Dr  Phillips intended that the alleged defamatory words would be republished in the mass media as part of the campaign strategy to destroy Mrs Holness' integrity.

She further claims that Phillips made the alleged defamatory statement with the improper motive of ensuring her defeat at the polls on February 25.

Stephen Landall, a critical care nurse, living in New York, and Mrs' Holness' only brother, is suing because of comments allegedly made about him by persons who responded to the statements made by Phillips.

Comments made by some persons on social media allegedly described convicted Jamaican drug dealer Andrew Wayne Landells who is serving a sentence of 15 years in the USA as Mrs Holness' brother.

Mrs Holness said since the publications, she has assisted her parents to issue photographs of her brother as well as a press release to make it known that the convicted drug dealer was not related to them.

Mrs Holness claims that Dr Phillips as campaign manager published the alleged defamatory statements knowing that the voting public considers integrity to be an important issue in determining who they vote for.

She said he published the statements knowing that it was public knowledge that she was the wife of JLP Leader Andrew Holness, she was a real estate developer and that she was responsible for the construction of the house. She claims that Dr Phillips was aware of the false and defamatory publications on social media  about her and her brother prior to the mass rally in Manchester on February 14 .

She  contends that Dr Phillips was aware that ordinary persons and media practitioners would believe that when he asks or frame questions in a certain manner, he has information or evidence to support it.

Mrs Holness further claims that based on his position and as former Minister of National Security, the members of the public would place heavy weight on his utterances as he had at all material times the "strategic objective of investigating, preventing and managing enforcement of financial crimes such as money laundering."

The claimants say they will be seeking an injunction to bar Dr Phillips and the other defendants from continuing the alleged defamatory statements.

They also say they will be seeking damages for slander and libel.

They are seeking aggravated damages for the alleged defamatory words published, and exemplary damages to express the sense of outrage that the conduct of the defendants allegedly evoked.