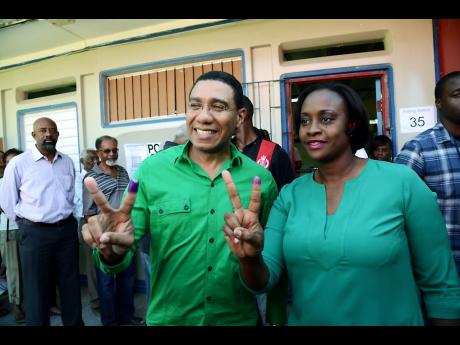 Rudolph Brown
Leader of the Opposition and incumbent for the St Andrew West Central constituency Andrew Holness (left) and his wife Juliet show the media their fingers after casting their votes in the St Andrew Eastern constituency.

When Juliet Holness indicated her intention to run as a candidate for St Andrew East Rural , she elicited much intrigue and commentary from political spectators.

Even though she is the wife of the prime minister-designate, her political ambitions were largely unknown to the public.

As was the case with the announcement of her candidacy, Holness' victory of 10,172 votes to Imani Duncan-Price's 9,482 votes has surprised many.

Buoyed by the support of constituents in St Andrew East Rural, she will now fulfil what appears to be a long-standing dream to join her husband in Parliament.

The journey to Gordon House has been an arduous one. Going up against a former Miss Jamaica World was no easy task, given the political prowess associated with the Duncan name.

Holness was also disadvantaged by the fact that there was a short campaign period.

Being a newcomer, she had a steep learning curve to overcome in a very short time.

The political neophyte was selected to run in the constituency after Alexander Williams pulled out of the race.

Holness had said she was the ideal fit to serve as the member of parliament for the constituency, given that she was already assisting Williams with canvassing in the various communities.

The fact that she is the wife of a former prime minister who serves as the JLP party leader seems to have made her very favourable as she was well received by members of the constituency.

Holness has a background in economics and accounting, having pursued those subjects at the undergraduate level and accounting at the postgraduate level. She was senior manager at PricewaterhouseCoopers, a chartered accountant with the Association of Chartered Accountants, and currently works in the construction industry and real estate development.

Holness will now exchange her calculator and hard hat for a seat in Parliament alongside her husband, making them a power couple in the political arena.