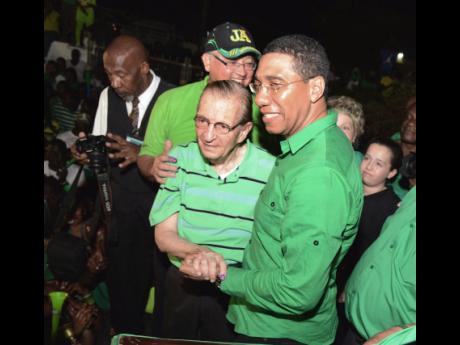 The Jamaica Labour Party (JLP) has rebounded from a turbulent four years to defy great political odds and seize the win in the nation's 17th general election.

When the dust settled after an incident-filled day, the JLP secured more than 12 marginal seats to move past the much-needed 32 seats to form the next Government.

Despite the cheers, JLP Leader Andrew Holness soberly took the stage at the party's Belmont Road, New Kingston, headquarters after the party he leads secured victory in the polls.

"I want to thank God for this victory and the people of Jamaica for investing in me the opportunity," he declared.

"It has been a long journey."

Added Holness: "We have carried a message and the people of Jamaica accepted our message, but this is not the end, it is just the beginning."

The JLP leader promised that the Government he would be leading would change the way things are done as "we have been given stewardship of the country and we stand to be held to account. That is the cost of victory".

Accompanied by his wife, Carla, former JLP leader and Prime Minister Edward Seaga, who made a cameo appearance in St Andrew West Central yesterday, after his first appearance on a political platform in nine years, only a week ago, returned to the victory stage last night, with his political protÈgÈ.

Holness respectfully bowed to seniority and allowed Seaga to speak. In a witty presentation, the former JLP leader, in turn, paid tribute to Holness for what he described as a hard-fought campaign.

Banking on its "Poverty to Prosperity" campaign, the JLP cashed in big last night, defeating the People's National Party (PNP), armed with its 'Step Up the Progress' mantra.

It was unadulterated jubilation for a party that had been repeatedly tested and tried over a protracted span.

After surviving several leadership scares over the period, Holness, whose political career careened uncontrollably on numerous occasions since his sudden ascension to the zenith of political life, has finally silenced his critics.

The victory materialised after a hectic four months on the trail when opinion polls appeared whimsical at best, seeming to favour one party and then the other at the drop of a hat.

The writing was on the wall when the JLP's Fayval Williams surged to defeat the PNP's AndrÈ Hylton, a first-term MP.

Another woman who prevailed for the JLP was Juliet Holness, wife of the JLP leader. After surviving a raging controversy over the house the couple is building in Beverly Hills, the two have earned their seats in the House of Representatives.

In so doing, the couple created political history as the first time that prime minister and spouse will sit simultaneously in the nation's Parliament.

In the battle of the lawyers, Alando Terrelonge defeated the PNP's Arnaldo Brown to secure St Catherine East Central, and the JLP's Floyd Green took the weathervane seat of St Elizabeth South West.

JLP Chairman Robert Montague returned to take St Mary Western by the scruff of the neck from the PNP's Jolyan Silvera, who defeated him four years ago, while Dr Norman Dunn created a stunning upset over the PNP's Winston Green.

It was a day that harked back to memories of 2007 when the JLP prevailed over the PNP for the first time in four electoral terms between 1989 and 2007.

Labourites appeared hesitant at the start of the evening, but by 9:16 p.m. they were dancing with wild abandon.

It all happened on a day when voters got frustrated and turned off by perceived glitches in the electoral system that had them waiting for long periods.