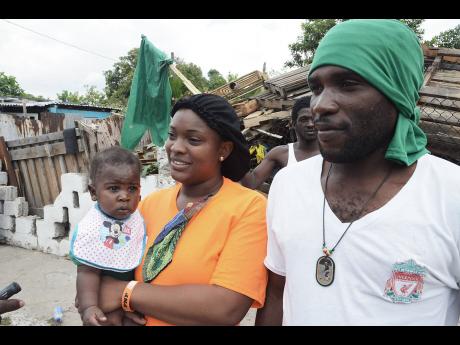 Norman Grindley
All in the family: PNP supporter Chevelle Gordon and her partner, JLP supporter Shellando Bernard, were out on election day, February 25, with their baby.

The elder Bernard, is one of the few hundred Jamaica Labour Party (JLP) voters in the constituency controlled by Portia Simpson Miller, the PNP president.

But Chevelle Gordon, the baby's mother is a PNP supporter and thinks the child will follow her ways.

As Labourites and Comrades mingled outside a polling station in Greenwich Farm, on Thursday - election day - the contrast of young Bernard, dressed in green, resting across his mother's orange-clad chest could not be missed.

Gordon, however, said that the colour of her child's shirt was merely coincidental.

"It is not the father, is me put him in green. It nuh have nuttin fi do with it," she said.

The party colour of the PNP is orange and the JLP's is green.

The senior Bernard said green represents prosperity, and that with him being the head of the household his son would follow his lead.

The PNP's Simpson Miller was challenged by the JLP's Victor Hyde for the seat she has won since 1976. She won the seat again.

Bernard told The Gleaner that he expected Simpson Miller to win the constituency but was hopeful the JLP would have won the general elections giving both him and his partner something to smile about later. With the JLP victory that would be announced hours later, it is fair to say that all were smiling by bedtime.