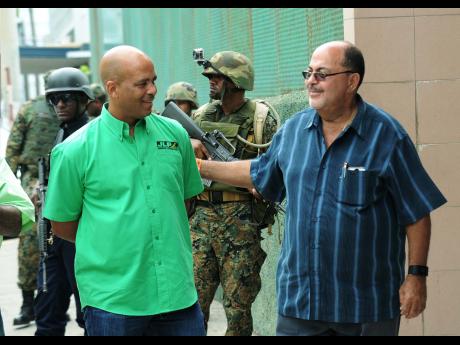 Ricardo Makyn
The Jamaica Labour Party's winning candidate for St Thomas Western, James Robertson (left), speaks with attorney for the People's National Party John Junor outside the Electoral Office of Jamaica (EOJ), while Jamaica Defence Force soldiers keep a watchful eye as ballot boxes are moved from a truck into the downtown Kingston-located office. The boxes had been transported from St Thomas Western.

With reports of tension in some areas across the island, the prime minister has appealed to supporters of both parties to remain calm.

Electoral officials yesterday indicated that the recount of ballots for St Thomas Western was relocated to Kingston as a precautionary measure.

According to Director of Elections Orrette Fisher, the decision was made to move the boxes because scores of political supporters had been gathering at the St Thomas Western venue where the counting had been taking place.

In a release to the media last evening, the prime minister said, "All Jamaicans have a responsibility to ensure that Jamaica's reputation as a mature democracy is preserved and nothing causes hurt to anyone."

In the meantime, Dr Horace Chang, general secretary of the Jamaica Labour Party (JLP), has raised concerns about widespread rumours regarding a change in the election results.

Responding to reports of tension after the recount in St Mary South Eastern shaved the majority of the JLP to 32, Chang said that the JLP had won the popular vote and had been given the mandate to take over the reins of government.

While expressing concerns regarding the speed at which the count had been proceeding, Chang stated that he had full confidence in the electoral process and noted that several independent observers, including the Organization of American States, had ranked the election as free and fair.

For its part, the Electoral Office of Jamaica has said that recounts for 40 of the 63 constituencies were completed on Saturday and that the overall seat count up to last night still stood at 32-31 in favour of the JLP.