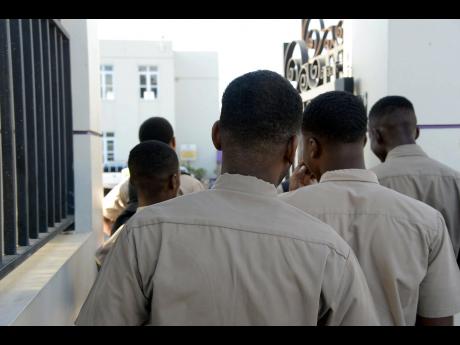 Norman Grindley
Students turned up for classes at Kingston College yesterday morning with what are said to be mohawks and fade hairstyles were locked out of school. 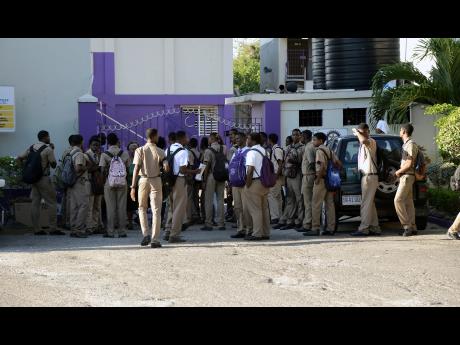 Dean of Discipline of Kingston College Ainsworth Walker has defended the school's decision to turn away scores of fourth, fifth and sixth form students who were yesterday, slated to sit midterm examination on the North Street campus.

Many of the students were gathered outside the locked gate when The Gleaner arrived at the school at approximately 7:45 a.m. yesterday, when the examination were scheduled to start.

They told The Gleaner that they would be sitting their Caribbean Secondary Education Certificate (CSEC) and Caribbean Advanced Proficiency Exam (CAPE) in less than three months.

Walker was attempting to send some of the students who remained on the school premises to the chapel at the front of the institution.

He told The Gleaner that the students had been prevented from entering classes because they had been repeatedly flouting school rules relating to attire.

"Most of them are repeat offenders," Walker said in the presence of some of the students. "We have consistently, constantly spoken to them. I am here (at the gate) every morning."

He said that rules of the school stipulate that hair must be conventionally styled at one level. "We have been saying this from September and previous years."

Walker said that reminders of the rules were placed on the examination schedules over the past three weeks.

"It is the third week of exams and some students continue to ignore the rules," he said. "As soon as we ease up, the 'fade' and mohawks are back, once you give them a bly (chance) everything collapses."

Although their hair was cut low, most of the students involved, admitted that they were wearing fades, a style in which the hair at the sides are lower than the top of the head.

Responding to accusation that the school is lenient with students of Indian and Chinese orientation, Walker said, "students expect them to bald their head like mine but it can't be that the same rule applies for obvious reason. We have to use our discretion."

"We think that we are being victimised," said a fifth form student. "Look at us, our hair is cut low and are well groomed."

He was supported by an obviously upset woman who identified herself as the mother of a sixth form student. "Why is it being done on a morning when a maths exam is being held?" she queried.

The parent was chastised by Walker for supporting errant students. "When we have mothers like these, riling up the children in front of authority, what are we teaching them?" he asked.

In her defence, the parent said that she had no intention of "riling up" students but suggested that discretion was not being employed as the school took action when students should have been sitting examination.

This is not the first time that Kingston College has sent home students for inappropriate attire as more than 20 students were sent home in 2012.