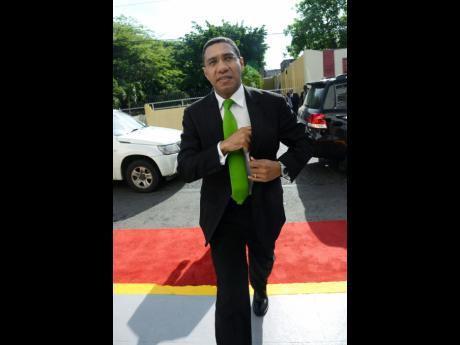 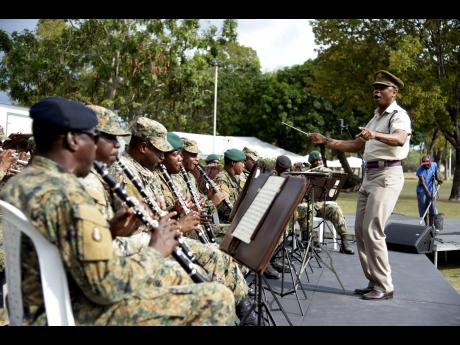 Gladstone Taylor
Members of the Jamaica Military Band rehearse yesterday ahead of today's swearing-in of Andrew Holness as prime minister of Jamaica.
1
2

The usual serenity at King's House will today be shattered by gleeful, thunderous applause as Andrew Michael Holness is installed for his first full term as prime minister of Jamaica by Governor General Sir Patrick Allen on the lush, green lawns of the latter's residence.

In his second inauguration as head of government in the last five years, Holness will officially take the reins of government after being given a mandate by Jamaicans on February 25 to run the country's affairs for the next five years.

Holness, who is expected to name his Cabinet after today's swearing-in ceremony, will steer the ship of governance with a razor-thin, one-seat majority in the House of Representatives.

This is Holness' second time as prime minister, with his first stint lasting for a little more than two months, spanning October 23, 2011 to December 2011.

Jamaica House yesterday said that Holness will take the Oath of Allegiance and the Oath of Office of Prime Minister, after which he will receive the Instrument of Appointment to office from the governor general.

Members of the diplomatic corps, the judiciary, and other government officials are expected to be in attendance.

Nineteen years ago, a 25-year-old Holness stepped into Gordon House as a first-time member of parliament after winning the St Andrew West Central seat in the 1997 general election.

Determined to make his mark on a larger stage in the political arena, Holness rose to the position of leader of the Jamaica Labour Party (JLP) in November 2011, some 14 years after he entered representational politics. In the wake of the resignation of Golding, then the party leader and prime minister, the party coalesced around Holness, who many believed best represented the changing demographic, particularly among post-Independence voters.

Two years after he became MP, Holness served as opposition spokesman on land and development from 1999 to 2002. In 2002, he shadowed the portfolio of housing and then education in 2005. Holness served as education minister from 2007 to 2011 during the Golding administration.

Under his watch as education minister, Holness introduced the National Education Inspectorate (NEI), which was designed to address the issue of performance and accountability in the educational system.

The NEI was proposed in a 2004 report of the National Task Force on Educational Reform.

In his inaugural presentation, Holness is expected to reach out to parliamentarians on the Opposition benches in Parliament as he takes on the onerous task of governing with a slim majority.

With the new administration likely to pursue a packed legislative agenda, some government observers are of the view that bipartisan cooperation is critical if several proposed laws highlighted by the incoming government are to get a smooth passage in the House of Representatives.