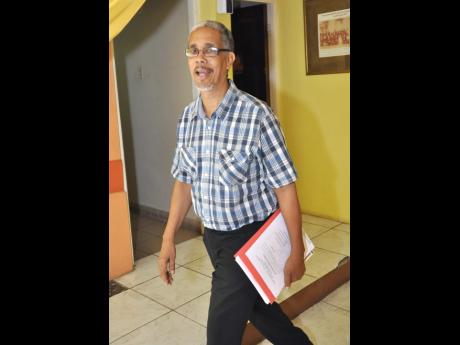 Paul Burke, the under-pressure People's National Party (PNP) general secretary, has urged Comrades to blame him if they are desperate to point fingers at anyone for the party's loss in the recent general election.

"If the party wants a scapegoat, if it makes us feel happy, then blame me ... but it will not be the truth or the facts, and by this self- and mass deception, we will not fix the problems," Burke reportedly told party insiders in a missive issued days ago.

"As I accept final responsibility for the organisation of the PNP ... if it makes some happy, I am also willing to take full and complete responsibility," added Burke as he referenced a letter that he wrote to the officers of the party on February 29.

Burke told the officers that while he was prepared to pay the price for the electoral defeat, he would not accept full responsibility as all decisions were made in good faith based on the best available information at the time.

With some critics arguing that this was the worst electoral campaign by the PNP in decades, Burke said that the party's campaign leadership, led by President Portia Simpson Miller, and campaign director Dr Peter Phillips, worked extremely hard during the process.

"Yes, we made some mistakes, but I have nothing but praise for the two Comrades (Simpson Miller and Phillips) who did their best to make the party win.

"I would want to believe that I also played a supporting role but readily accept that there is place for valid criticism," said Burke.

The general secretary said that to help Comrades make an objective and dispassionate assessment of the loss at the polls, he would be releasing seven documents, but they would be kept internal and shared particularly with members of the National Executive Council, the party's second highest decision-making body.

"I will discuss nothing in the media, not even to defend myself ... nor use social media directly or indirectly."

According to Burke, he will deal with the issues and personalities and will remain loyal to the PNP even if he is not the general secretary.