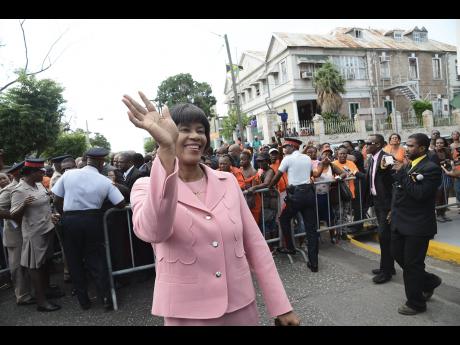 In a rallying call for both sides of the political divide to work together for the good of Jamaica, Opposition Leader Portia Simpson Miller yesterday signalled that the parliamentary opposition would carry out its job in a manner that contributed to the building of the country.

However, she argued that the Opposition had a constitutional duty to scrutinise the Government on behalf of the people.

"We will not fail in performing that duty. We will be strong; we will be vigilant; and we will be firm. We will provide constructive criticism. We commit to being a vibrant Opposition, holding the Government accountable at all times."

Simpson Miller also hailed the country's vibrant democratic tradition, noting that "win, lose, or draw, I would not trade democracy for anything else".

"The people of Jamaica have spoken, and as their elected representatives, we have a duty to listen carefully and to learn the lessons of this moment," she said.

Commending voters who exercised their franchise during the February 25 polls, Simpson Miller urged members of the House of Representatives to conduct themselves in a manner that would encourage more Jamaicans to participate in the electoral process.

While congratulating Prime Minister Andrew Holness and his team for victory in the general election, the opposition leader took a humorous jab at her political opponents.

"... Let me advise my friend: do not get very comfortable on that side," she said.

Simpson Miller also made special mention of Holness and his wife, saying that it was the first time that Parliament was being graced with a husband-and-wife team.

However, Parliament has had two sets of couples serving during separate parliamentary terms.

In 1993, Dr Paul Robertson and his wife, Karlene Kirlew-Robertson, were elected to the Lower House, and before that, Glenmore Webley and Joan Gordon Webley served after the 1980 general election.

Holness, however, is the first prime minister to serve with his wife.