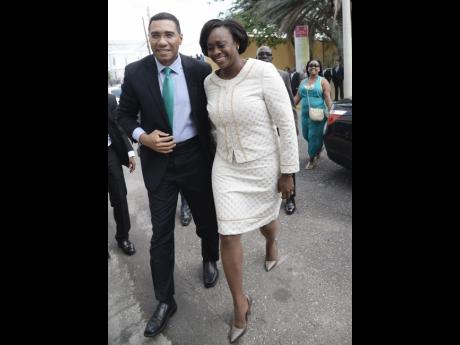 On a day dominated by stark contrasts, Prime Minister Andrew Holness called for parliamentarians on both sides of the aisle to make the nation the priority of all.

"This is the time for us to put Jamaica first," Holness said during the first sitting of the new House of Representatives, comprising members of parliament who won the 63 seats in the February 25 general election.

As Holness addressed seemingly receptive members on both sides of the divide at Gordon House, there were no signs of the discord that marred the recent political campaign. Instead, there were pats on the back, hugs, and embraces all around the chamber as members took the oath of office, a far cry from the acerbic outpouring from platform speakers on the campaign trail.

But outside, on Duke Street, was a completely different matter as the effects of a bitter election cycle still lingered.

Raucous supporters hurled insults at each other, while, on the inside, Holness sounded rallying calls for unity.

Holness would not be deterred by the cursing and sounds of vuvuzelas on Duke Street as he vowed to fulfil all promises and pledges that he made ahead of the election and urged Jamaicans to hold the governing party responsible.

Holness was addressing the parliamentary chamber for the first time since he retained the position of prime minister.

Veteran parliamentarian Pearnel Charles also made his debut as Speaker of the House of Representatives moments after he was nominated by new parliamentary whip Everald Warmington.

It was a day when the police had to use their might to ward off unruly diehards.

However, Kevin Williams, marshal of the Houses of Parliament, as well as the new Speaker, had very little to do outside of the customary parliamentary activities.

"Sixty-three of us elected in this House made pledges and promises," said Holness in the traditional prime minister's statement to the House after 61 of the 63 were sworn in.

Davies is ailing, while Kellier is currently focused on a magisterial recount in the constituency that he has represented in Parliament since 1989.

"Our being here today is a signal of not only the confidence that the people have reposed in us, but the expectations of fulfilment of pledges, promises, and commitments," said Holness.

Added Holness: "In the same way we crossed many bridges, climbed many hills, navigated many mountains to get the votes, now that we have the votes, we must keep our promises, make ourselves equally accessible to our constituents, and uphold the highest standard of public conduct."

Noting that the composition of the Parliament was historic, Holness pointed out that he had been joined by his wife, Juliet, which reflected significant emphasis on family.

Holness said that he was acutely aware that the significance of the seat distribution - 32 to the JLP and 31 to the PNP- in the Parliament was not lost on members.

"I am equally sure that we are all mindful of the tremendous responsibilities and challenges this situation presents," he said.

Continued Holness: "This is a moment that requires cooperation, maturity, partnership, consensus building, and importantly, the patriotism that I am sure resides in all of us."

For the first time in the formal parliamentary setting, Holness declared that the focus of his Government would be "inclusive economic growth, job creation, sustainable debt reduction, and improving the general well-being of Jamaicans".