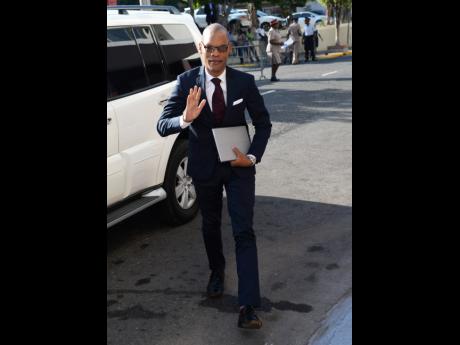 After a turbulent year on a rugged political landscape, Raymond Pryce has kept his word to venture on what he has described as a sabbatical.

"As I do so, I step away from one more post," Pryce, who did not seek a return to Parliament in last month's general election, asserted in a Facebook post on Thursday.

"At our AGM (annual general meeting) this weekend, I will relinquish the chairmanship of the PNP Patriots so that I can grasp with both hands the knowledge I will glean from my journey with and among the people," he said.

"With all my enthusiasm, I ask you to do as I do: believe in our future."

Yesterday, in a statement after its AGM on Saturday, the Patriots said that the meeting had recognised that during the preceding year, "the organisation faltered in its drive to attract new voters, and as such, will formulate a strategy to aggressively promote the philosophy of the PNP to young professionals as part of a new recruitment effort".

Pryce did not seek re-election during the AGM.

With the election of a new executive committee, the membership reportedly sounded the urgent need for renewal and reform within the organs of the People's National Party (PNP).

Insiders told The Gleaner that Pryce had sensed that members of the Patriots, the young professional arm of the PNP, had felt that under his leadership, the group had lost its initial vision.

"The period into which we as Comrades find ourselves requires deep and serious introspection," Pryce stated in his Facebook post.

Pryce lost his bid to represent the St Elizabeth North Eastern constituency he represented for one term as well as his position in the PNP as deputy general secretary.

"Were we academics, a sabbatical, perhaps, would be appropriate, if not required," he said.

Pryce continued: "So often, we are so worried about the bark of one tree that we forget the health of the entire forest or even the ecosystem within it."

Javette Nixon, an entrepreneur and marketing consultant, will lead the new executive after he was elected unanimously to replace Pryce.

Omar Newell, an attorney-at-law and the secretary of the PNP's Region Two, has been elected the group's general secretary.

Said Pryce: "The weight and honour and responsibility of public office does not always allow one to step back, survey the forest, and to, as we say in Jamaica,'wheel and come again'".

He added: "Fortunately, I can. So I am embarking on a sabbatical free from posts, titles, and offices. Look for me where it matters most - as a student in class with you in the trenches, in the far reaches, in the high mountains, and in the low valleys. I am as 'clay' in the hands of the 'potter'. You are the potter."

The AGM reportedly mandated the new executive committee to advocate immediately for a programme of renewal of all aspects of the party's organisation, including its structures, affiliates, and leadership corps.

In a statement, the group noted that the AGM reaffirmed the organisation's commitment to the party as the best vehicle to advance a national development agenda for Jamaica.

The AGM agreed to participate in the appraisal of the party's defeat at the recently concluded general election by submitting its own analysis of the organisation and the results.