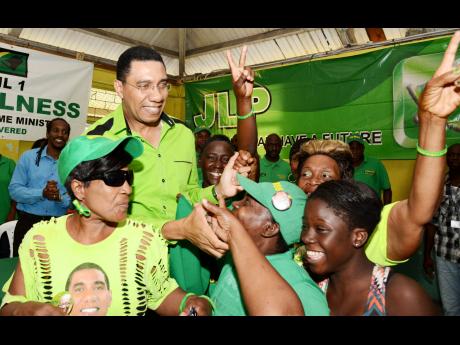 Prime Minister Andrew Holness has identified the Riverton City disposal site as a possible avenue from which employment and new industries can be generated.

Addressing yesterday's first meeting of the Jamaica Labour Party (JLP) Area Council One since the general election, Holness said that the Government was to begin work on a waste-management policy aimed at creating jobs.

According to Holness, consideration was now being given to private companies interested in taking over the operations of the Riverton disposal site.

"There are many expressions of interest. Indeed, serious interest has been expressed in taking over the Riverton City dump, and our Government will divest that to a qualified person who has the right technology to use the dump to create electricity, creating another industry that will employ persons," he added.

The disposal site, which serves Kingston and St Andrew, has been a long-standing concern for environmentalists.

In March of last year, sections of the facility caught fire, blanketing the city with smoke, which negatively affected the ambient air quality and human health, particularly in communities located to the north, north-east, and north-west sections of the site.

The incident led to great public outcry and a call for the disposal site to be privatised.

The prime minister also announced that a policy introducing the separation of garbage would form part of measures to foster the development of a recycling industry in Jamaica.

"One of the things we are going to do now is to implement a policy of separating our waste, and you are going to participate in that ... ," Holness said.

"There are many investors who are interested in coming to Jamaica and putting their money down in recycling the plastics and the paper, but we have to have the laws in place to make it easy for them to recycle ... and easy for them to do business in Jamaica."

In an address that touched on a wide range of environmental concerns, Holness defended the track record of the JLP with regard to the environment and affirmed his commitment to ensuring environmental protection.

Since naming his 18-member Cabinet just under two weeks ago, the prime minister has been criticised by environmentalists for the lack of a designated environment/climate change ministry.

Dr Horace Chang, minister without portfolio in the Office of the Prime Minister, has said that the environment portfolio would fall under economic growth and job creation.