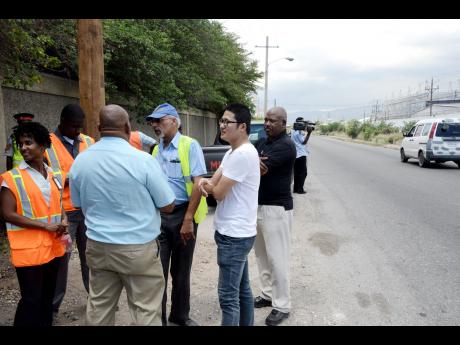 Head of the police Traffic Division Senior Superintendent Calvin Allen has promised to have his teams in place to minimise disruptions on Marcus Garvey Drive in Kingston come Monday when a multimillion-dollar road improvement undertaking will begin.

Allen is under no illusion that his team will be able to prevent the inevitable delays for the operators of the approximately 40,000 vehicles that travel along Marcus Garvey daily.

"We will have our teams in key areas to help with the traffic flow, and we know motorists will appreciate the work that is being done, but there will be some delays," Allen told journalists yesterday after meeting with officials from the National Works Agency (NWA) and the contractors China Harbour Engineering Company.

Stephen Shaw, manager of communications and customer service at the NWA, also concurred that motorists would face delays.

He said that persons should make travel plans bearing in mind the likely impact of the work.

"I can assure you that the road will remain open during the work, but there will be reduced lanes and heavy-duty machines, so there will be delays," said Shaw.

He said that short-term improvement work would be done on one of the alternative routes, Spanish Town Road, to ensure that it could manage increased traffic from motorists who seek to avoid Marcus Garvey Drive.

According to Shaw, the 2.4 kilometre stretch of Marcus Garvey Drive, between East Avenue and Harbour Street, will become a work zone for the 12-month period.

Shaw said that when the project has been completed, motorists could expect a 30 per cent reduction in the travel time along the corridor and controlled intersections with left-in and left-out manoeuvres, which would eliminate conflict points along the corridor.

The work should also reduce the instances of flooding recorded in sections of Marcus Garvey Drive once it rains.

"The road will be lifted by as much as three feet in sections, and a stabilised concrete base will be used in its construction. This will further enhance the quality of the road, which will be constructed at a cost of US$20.5 million," said Shaw.