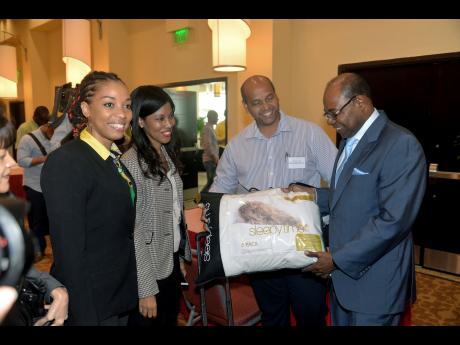 Jamaica's new tourism minister, Edmund Bartlett, has announced plans for the establishment of a Tourism Enhancement Fund (TEF) financial institution geared at providing stimulus to the 'little man' in the tourism industry.

The TEF currently has just over $3 billion in its coffers.

"I believe this is what is going to make the small hotelier, the trader, the artisan, the little man who has an idea and is ready to convert his idea into something material to which a price can be attached so that jobs can be created and earnings can be had and the economy of Jamaica can get the value that tourism must provide," said Bartlett.

Bartlett pointed out that in all tourism economies, the infrastructure has to be built out for the local entrepreneurship to express itself, and central to that build-out are capital, availability, and credit facilitation.

"The Jamaican reality is that our banking system, currently structured, is not responsive to tourism in the way that we are talking. If tourism is to be the great stimulant to economic growth that it is in many places, then it must be given the space and the infrastructure support required to enable it.

According to Bartlett, in other destinations that he has gone to and about which he has also done some research, Mexico and the Dominican Republic have discovered that to really absorb the demand of tourism, local entrepreneurs had to be enabled. Credit was central to it so they have established the Bank Enational.

Jamaica, he said, would establish a similar institution after all the kinks have been worked out. In the meantime, the plan is to help the industry through the EXIM Bank.

This is not the first time that the tourism minister has embarked on such a system geared at helping stakeholders financially.

Between 2007 and 2011 when he served as tourism minister, he rolled out a series of programmes in the region of $100 million to provide two sets of stimulus for the small hotels.

The programme, tagged five by five by five, gave access of $5 million as a loan for five years at five per cent. Another project that he implemented assisted the transportation subsector. Small operators such as the Jamaica Union of Travellers Association and Maxi drivers were able to access loans as high as $3 million for three years at three per cent.

"What we are looking at is expanding this and looking at a figure that would be sufficient to get the programme started with the EXIM Bank," said the tourism minister.

Bartlett promised that every effort would be made to ensure that no harm is done to the mega-projects that have been envisaged and other enhancement activities to which the fund is committed.