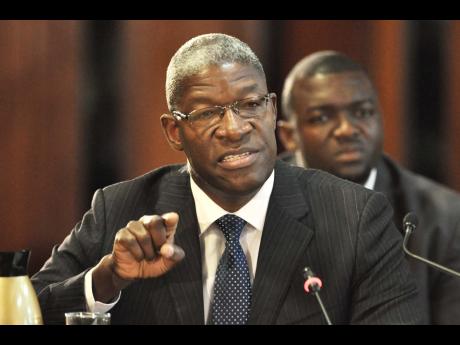 Former Police Chief Owen Ellington has urged the new administration to leave no stone unturned in ferreting out marauding criminals.

"Tell yourself that you only have one chance to get it right," declared Ellington at an Economic Growth and Sustainability Summit on Wednesday at the University of Technology.

Ellington also urged the Government to be diligent in its approach to crime in Jamaica.

"We have a situation in Jamaica where criminals are convinced that crime pays," he said. "I appeal to the Government that we take a serious approach this time around."

Added Ellington: "You will be amazed at the rapid turnaround in public security, which will be realised in improved citizen confidence, improved investor confidence, and job opportunities."

slap on the wrist

Making reference to the Deterrence and Rational Choice Theory, Ellington lamented that too many criminals were given a slap on the wrist after they were charged. He contended that with serious crimes a real threat, the practice had contributed to the spiralling crime rate.

"When you have an individual who is charged with six murders committed over one weekend in 2006, and in 2016, his trial hasn't started, you can't convince that man that crime doesn't pay," he argued.

Added Ellington: "When you have drug offenders who are caught with multiple kilos of cocaine and on first appearance in court, they are offered bail, you can't tell that person that crime doesn't pay because they know what happens to offenders in other societies if they are caught with a lesser amount."

He continued: "When you have gun offenders who get convicted on gun crime and walk out of court with a fine, you cannot convince that criminal that this is not free space."

According to Ellington, the Deterrence and Rational Choice Theory says that criminals are rational beings who calculate the possible benefits of the crimes that they commit.

He suggested that the hoodlums weigh that against the possible cost to them in the form of punishment if they are caught.

Ellington said that criminals tend to pay attention to situations in which, to them, they stand to benefit more than they are likely to be punished.

He said that there is an insatiable demand from criminals in Jamaica for illegal guns. As such, he stressed that there must be a no-nonsense approach to tackling the monster that continues to plague the country.