concerns over promotions in the JCF 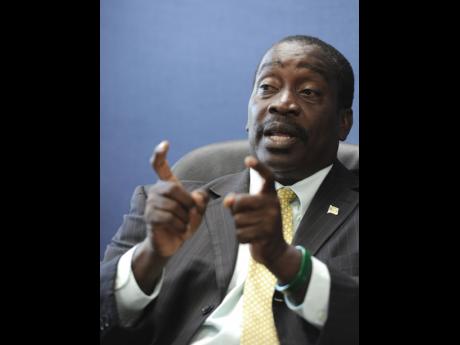 National Security Minister Robert Montague has moved to tackle the vexing issue of promotions within the police force, amid widespread charges that the process is fraught with cronyism.

Montague, who took over the national security portfolio just over a week ago, said one of the things he has requested from Police Commissioner Dr Carl Williams is a "transparent" policy that will guide promotions through the ranks of the Jamaica Constabulary Force (JCF).

"One of the things I've asked the commissioner to do for me is to come [up] with a promotions policy that is transparent, that is merit-based and easily understood," he said during an exclusive interview with The Gleaner.

"So that when the man join training, Supe [superintendent] don't have to like him, but by his own efforts he gets promoted," Montague underscored.

For one police corporal, the minister's directive is long overdue as, according to him, the issue of promotions has created widespread discontentment among rank-and-file members of the JCF.

The corporal, who requested anonymity, charged that it has become routine for senior officers to circumvent existing JCF promotions criteria and instead promote their close acquaintances.

As an example, the corporal charged that police personnel are being promoted without proper background vetting, without sitting the required exam, or without completing the probationary period from a previous promotion.

"I see people get promoted with questionable character. And the force know, but because of their links ... ," he charged.

He acknowledged that JCF policy allows a member to be promoted without sitting the exam, but explained that this was in unique circumstances. In addition, he suggested that this facilitates "favouritism" by senior officers and does not ensure that the best policeman or woman is promoted.

"It seems like the friend thing a overrun the normal procedure for promotion, and that's the issue right now. People are getting promoted because of dem links and dem friends and other things, and the hardworking person is not being promoted," he argued.

To bolster his claim that some JCF members are being promoted before the completion of their probationary period, he cited the case of a female constable.

"She was promoted to corporal, and before she even done the probationary period, she was promoted to sergeant, and in a year's time she's an inspector, then deputy superintendent in another year," the corporal charged.

"If you notice in the senior ranks, you have some people who get promoted every year or every two years; you see just one set [of persons being promoted] and you could call the names. It is unfair to the rest of us who are serving," he underscored.

Obviously aware of the concerns, Montague said he wanted a policy that is clear to every person joining the JCF that they will be promoted based on merit.

"So that nobody tell you that him don't get promotion because Mary and Tom don't like him. It must not be that the process is this and you have to jump through six hoops and then you take five steps back and you dance with grandma and come back," the minister stressed.