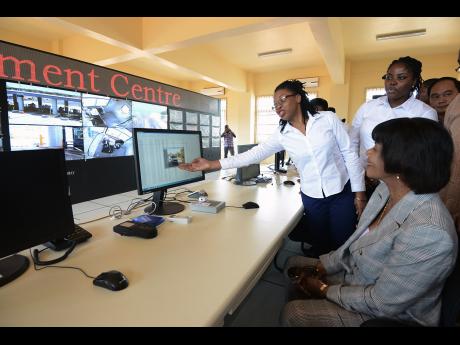 Motorists using the north-south link of Highway 2000 after new toll rates go into effect will use a different payment system than now exists on the east leg that is operated by a different concessionaire - TransJamaican Highway.

Instead of paying upfront wherever they access the highway, motorists will be given a toll card and pay only at the exit point. For this reason, the collection point now known as the Mount Rosser Toll Booth will be dismantled, since it will no longer be needed.

This information was gleaned during Monday's tour of the highway by opposition Leader Portia Simpson Miller and other members of the People's National Party executive.

Yesterday was the final day for submissions from the public and interest groups regarding the proposed rates for different sections of the highway, which runs from Angels and Caymanas in St Catherine to Mammee Bay, St Ann, with multiple entry and exit points along the way.

Motorists planning to travel the full 66-kilometre stretch would be well advised to fill up for the journey, since there are no petrol stations along the route.

Meanwhile, during a stop at the Jamaica North South Highway management centre at Treadways, St Catherine, the touring party got a glimpse into how the company keeps an eye on motorists - via cutting-edge digital technology.

Using at least 30 flat-screen televisions, the company is able to track all vehicles entering the highway, recording important details such as the model, make and registration (licence) number.

The opposition leader used the opportunity to make an appeal for the toll rates to be tolerable.