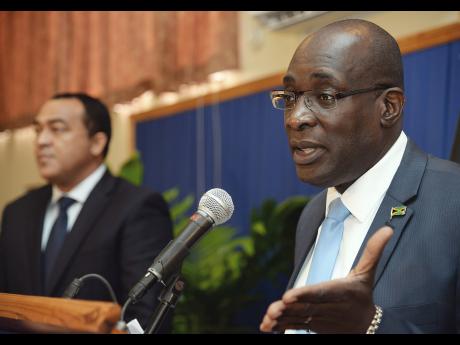 Education and Information Minister Ruel Reid says an announcement will be made on the implementation of the Government's tax policy at the end of the two-day Cabinet retreat, March 31 to April 1.

"After the Cabinet retreat and we are clear how we are proceeding, the finance minister should be in a position and, if not, myself, to clarify how we go forward," he said.

The administration had pledged to remove persons earning $1.5 million or less off the income tax roll come April 1. This will result in taxpayers who earn $1.5 million taking home an additional $18,000 per month.

In a Gleaner interview, the information minister said it was originally contemplated to implement the tax policy April 1.

Pressed for a comment on the implementation date for the tax initiative, Reid said the new tax arrangement could not be implemented until after the Budget Debate.

"So if you read between the lines, it could be that that is contingent on when the Budget is passed," he added.

While on retreat, the Cabinet will consider and approve the medium-term macroeconomic/fiscal policy framework and expenditure budget.

The ceremonial opening of Parliament, which will usher in the new parliamentary year, is set for April 14, at which time Governor General Sir Patrick Allen will outline the Government's programme for the new legislative year.

The Estimates of Revenue and Expenditure, the Fiscal Policy Paper (FPP), the Debt Management Strategy, the Tax Expenditure Report and the Consolidated Estimates for the 2016-2017 parliamentary year will be tabled on April 14.

Auditor General Pamela Monroe Ellis and her team at the Auditor General's Department will review the FPP over the two-week period, April 14-28.

Finance and the Public Service Minister Audley Shaw will open the Budget Debate on May 12.