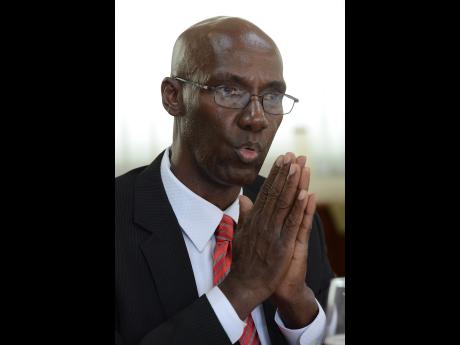 President of the Seventh-Day Adventist Church in Jamaica Pastor Everett Brown is once again making it clear that statements similar to those made by Pastor Michael Harvey on a People's National Party political platform in January will not be tolerated from members of the Adventist Church.

Speaking at a Gleaner Editors' Forum yesterday, Brown denounced Harvey's actions and stated that his words could have divided the congregation.

"Let me restate for members and for the wider public our position, the Seventh-Day Adventist Church does not, in the past, presently, or in the future support any political party, and more than that, we are encouraging, we are advising our pastors and our teachers and our workers not to go on any political platform and take any political position," he said.

Telling Comrades at a political rally in January to stick with the party, Harvey said, "A number of times, I have voted, and I have voted not only for the PNP, but I have voted other ways, but at this time, I support the policies of the People's National Party."

Brown said at the forum yesterday: "Let me tell you what this can do. If I as a pastor take a position and support publicly, a particular party, I have members in my church who are not of that view. By doing that, I have, as a spiritual leader, divided my congregation. So when Pastor Harvey went publicly on the platform and stated his position, I believe that as leader of the church, it was my duty to clarify to Jamaica that Pastor Harvey was not speaking on behalf of the Seventh-Day Adventist Church. That's all that was," Brown said.

"If he wanted to do that, all he needed to do was take leave or resign his position as pastor in the church. What he did wrong, he violated a direct order from the president of the organisation. He violated a tradition that we operate as workers of the church," Brown said.

Brown insists that Harvey was never defrocked as a pastor in the Adventist Church.

"You (The Gleaner) quoted Pastor Harvey as saying, 'I just didn't do anything wrong, I don't know what my church is doing'. For over a year, we have indicated to Pastor Harvey that as a church, we are now looking for a new pastor for the NCU (Northern Caribbean University) church, a situation that Pastor Harvey is aware of. Pastor Harvey has participated in interviewing candidates for the position, and we had intended to place a person in the position, in January but decided against it because the candidate was not the person that we thought," he said.

"Even if Pastor Harvey had not gone public and supported a particular party, Pastor Harvey would not have remained as pastor of the church. Pastor Harvey's substantive position is VP for spiritual affairs. Pastor Harvey can function as any other pastor functions. The only thing that we felt, since we have removed him from the church and since there is a divide in the church, is it's best for us to ask him not to go back in the church," Brown stated.