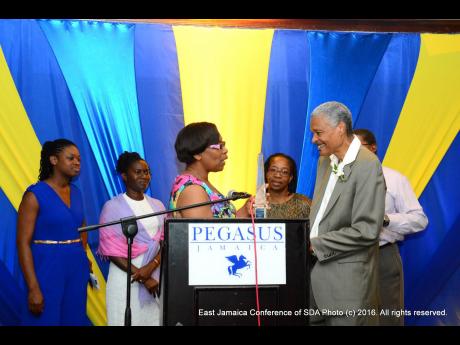 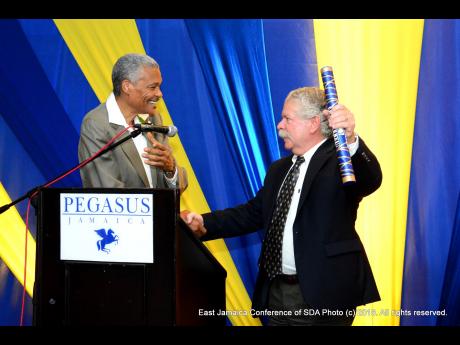 Contributed
Outgoing president and CEO of the Andrew Memorial Hospital, Dr Patric Rutherford (left), congratulates his successor, Dr Marvin Rouhotas, after passing on the baton during a farewell reception held for the former at The Jamaica Pegasus hotel in New Kingston last Tuesday.
1
2

Rutherford, who departs as president and CEO of Andrews, will be replaced by incoming head, Dr Marvin Rouhotas.

In his address, Pastor Everett Brown, president of the Seventh-day Adventist Church in Jamaica and chairman of the AMH board of governors, described Rutherford as a visionary leader whose faith in God and strong belief in the workers of the hospital had taken the institution from being a small institution with limited operations to a hospital of choice in Jamaica.

"[Rutherford is] a man with the capacity for hard work and a passion for excellence second to none who had a mission not to make Andrews Hospital the biggest or most ostentatious, but the best in Kingston," said Brown.

"His tenure here at Andrews Hospital could be considered as a case study for what we, as Jamaicans, can achieve when we truly believe. When we believe in our people; when we believe in ourselves; when we are committed to a cause; when we do not cower and run when the going gets tough; and when we support one another even when the odds are against us," Brown added.

Words of appreciation and commendation poured from the lips of staff members who gave their tributes in song, poetry and drama.

Rutherford, who led the hospital for more than 20 years, said the Almighty was the architect and builder of the success that he had achieved.

"He has opened doors when they seemed closed. He has sent me people when I thought I was alone. He has done some awesome things in my life and I am better for it," exclaimed Rutherford.

He thanked his wife for her support, patience and confidence in him, and revealed that their initial plan when they came to Jamaica from the United States in 1995 was to remain only for five years.

A gracious Rutherford also thanked the forefathers of the hospital upon whose legacy he had built, and praised the contribution to the hospital's expansion projects from Florida Hospital, Aston Tai and family, and The Friends of Andrews Hospital.

Rutherford also recognised the team of consultant physicians who work with the hospital staff to provide healing for patients and thanked them for respecting the philosophy of the Seventh-day Adventist Church.

In her final words to Rutherford before presenting him with his gift, Vice-president of Finance Zenobia Taylor wished him God's blessings as he moves into the next phase of his life.

"Your quiet, distinct, gentle demeanour, and your congenial smile will be missed by all, but we hope you will enjoy your retirement. May you live as long as you want and may God bless you," she said.

AMH is a private facility owned and operated by the Seventh-day Adventist Church in Jamaica for the past 72 years.

In October 2010, The Gleaner Company described the hospital as a gift to Jamaica from the Church when it presented AMH with the Gleaner Honour Award for its commitment to providing first-class health care to Jamaicans.