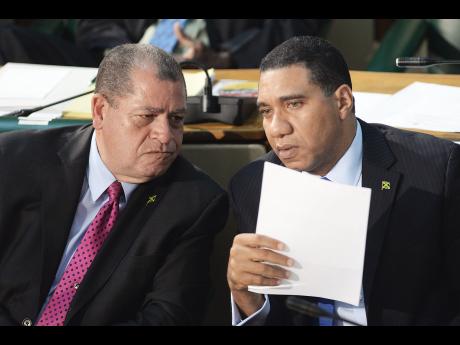 Opposition Spokesman on Finance Dr Peter Phillips has warned the Andrew Holness administration that now is not the time for recklessness, noting that Jamaica's economy remains fragile.

"There is not much play in the Budget. There may be temptation to give up revenues, and certainly there have been promises made to the public which have significant revenue implications," said Phillips, the former finance minister.

Making his contribution to debate on the Second Supplementary Estimates of Expenditure that were approved by the House of Representatives yesterday, Phillips said that Jamaica's public debt is the highest in the region.

"Now is not the time for recklessness, as the country still faces many difficult choices. National interest must prevail over political expediency. There are still many important and difficult tasks which remain to be tackled by the country - pension reform, public-sector modernisation and labour-market reforms - essential components for sustained, long-term growth and job creation," Phillips said.

Finance and the Public Service Minister Audley Shaw said the Government did not intend to conduct the business of the country in a reckless manner, pledging that the administration would be prudent in how it manages the economy.

Phillips stressed the importance of building consensus critical outside of Parliament, adding that "if there is no real consensus we will not get buy-in from the labour movement, private sector and the citizenry in general".

He challenged his Government counterpart to make unequivocal statements in respect of the institutions that give substance to consensus building.

Responding, Shaw said the Government was committed to forging a partnership with the private sector, public sector and the Opposition.

"God works in mysterious ways, his wonders to perform," he said.

"You know why God made us win by one seat ... maybe God Almighty is sending us a message with this small margin of victory, saying 'all of you must grow up and start working together in the interest of Jamaica'."

In respect of ESET, Shaw said Prime Minister Andrew Holness had asked the current team to continue its work, but noted that there was an issue concerning the chairman which the prime minister was seeking to work out.

In terms of EPOC, Shaw said he met with Chairman Richard Byles and asked him to continue working in that capacity.

"We must not give lip service to partnership; we have an obligation to show political maturity," the finance minister said.

The Second Supplementary Estimates of Expenditure, amounting to $808.4 billion, was passed by the House without amendment.