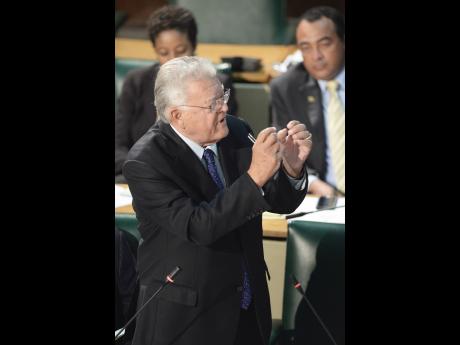 Almost six years after divesting Jamaica's burdensome sugar assets, the Government is re-entering the sector in an attempt to rescue several factories from failing.

Minister of Industry, Commerce and Agriculture Karl Samuda told the House of Representatives yesterday that the Government will, for the next three months, be operating the Long Pond Sugar Factory in Trelawny.

Long Pond had been divested to Everglades Farms Limited, but Samuda disclosed that the principals of the company "are in no position to start up the factory due to their financial position".

Cane at Long Pond was to be processed at the Appleton Sugar Estate in St Elizabeth under an arrangement worked out last year after Everglades announced it would close the factory.

However, the plans have hit a snag, as Appleton was forced to stop production arising from an ongoing, unrelated court matter.

Samuda said if the Government does not step in, sugar in Trelawny will be no more.

"It is imperative that the Long Pond factory, which is in good condition, immediately commence operations in order to rescue the over 95,000 tonnes of cane that has so far not been reaped in Trelawny," the agriculture minister said.

According to Samuda, "If we fail to reap the cane in Trelawny this year, we can simply forget about any sugar in Trelawny. One need not elaborate on the socio-economic impact of such a scenario."

Meanwhile, the Government is also coming to the assistance of the Monymusk Sugar Factory in Clarendon, which is owned by the Chinese business, Pan Caribbean Sugar Company.

The sugar company has indicated that, starting immediately, it will hand over the cane-growing operations to independent farmers. The Jamaican Government will take over operations for next year.

"This entire socio-economic fabric of southern Clarendon and St Catherine is at considerable risk if the Monymusk factory fails to operate next year," Samuda stated, before adding that the Government "has every intention" to find ways to keep the factory open.

Dr Peter Phillips, opposition spokesman on finance, demanded that the Government ensure that its rescue job does not jeopardise Jamaica's fiscal health under the ongoing economic reform programme.

Seeking to assure that Jamaica's delicate financial situation will not be affected, Finance Minister Audley Shaw criticised the previous People's National Party administration for not doing enough to remedy the situation before it became necessary for the current Government's intervention.

Samuda did not state the cost of the Government's rescue efforts, noting that the Parliament would be informed when the support strategy has been completed.

Jamaica's sugar industry has been affected by low productivity and a fall in prices on the world market.