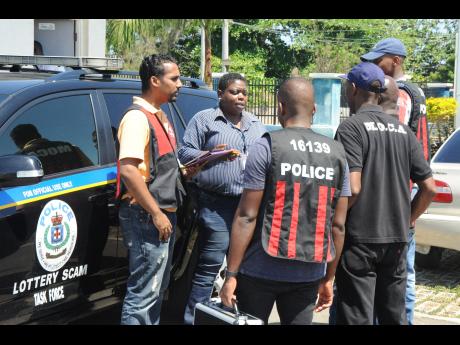 Paul Clarke
Inspector Dahlia Garrick (centre), head of the Corporate Communications Unit of the Jamaica Constabulary Force, speaks with members of the Major Organised Crime and Anti-Corruption Agency, while the unit’s liaison officer, Superintendent of Police Kevin Watson (left), looks on following an operation in Greenwood, St James, which resulted in several men being taken into custody.

The infamous lottery scam took a massive hit yesterday, with 19 people, including a policeman and seven women, taken into custody and more than $1.8 million in Jamaican currency seized.

The arrests took place during a major four-parish sweep by the police as they seek to put a further dent in the activities surrounding the lottery scam and the illegal guns-for-drugs trade.

The policeman, believed to be based in Kingston, was picked up during the police operation in the capital yesterday morning, while the others are from St Ann, Trelawny, and St James - the hotbed of the infamous lottery scam.

His name, rank, and assigned station are being withheld pending further investigations, the police further said.

The operations were led by the combined efforts of the Major Organised Crime and Anti-Corruption Agency (MOCA), the Counter-Terrorism and Organised Crime Investigation Branch (C-TOC), Mobile Reserve, and also involved the Financial Investigation Division, and the St James and Area One police external and international partners.

Head of C-TOC, Assistant Commissioner of Police Devon Watkis, said the operations were aimed specifically at putting a stop to the influence on the mainly western Jamaica-based lottery scam and its lingering linkages in major crime such as shootings and murders.

IN PURSUIT OF PERTINENT SCAMMERS

More than 200 police personnel were deployed across the parishes during the two days of operations, which were centred in communities such as Bunkers Hill and Holland Estate (Trelawny), Greenwood, Lilliput, Bamboo Avenue (St James), and other significant locations.

"These operations are continuing in pursuit of the pertinent individuals, and having already accounted for more than 20 locations, the proceeds from their illegal activities, illegal firearms, and ammunition, and other related criminal activities, we continue to go after them and their illicit activities," said Watkis.

Seven of those detained have been confirmed for extradition, with the possibility that the policeman could also be in that number, said Watkis, while withholding the names, pending further investigations.

Deputy Superintendent of Police in charge of operations at MOCA Jason Anderson said the morphing of the lottery scammers in the way they operate was expected and that the police remained a step ahead in the fight against organised crime.

"They have upped the ante and upped the game, and we, the law-enforcement agencies, are still ahead of them. It is a matter of time before we completely stamp out this scam," Anderson said.