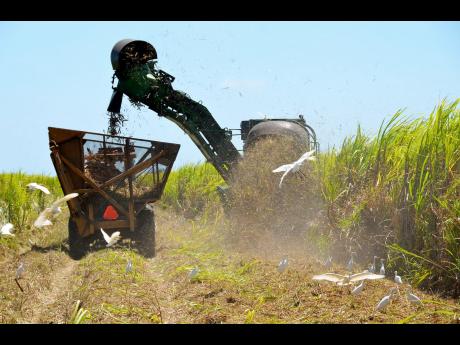 Some major players in the sugar industry have agreed that if the previous Government had acted sooner, there would possibly be no need for the current administration to intervene in rescuing private sugar companies from failure.

On Tuesday, Karl Samuda, minister of industry, commerce and agriculture, announced in the House of Representatives that the Government was moving to operate the privately owned Long Pond and Monymusk sugar factories that were divested almost six years ago.

Finance Minister Audley Shaw then accused the previous administration of not taking "adequate, pre-emptive measures" to respond to "an emerging crisis (that) developed over a number of years".

"There might have been sufficient attention but not sufficient decision," Heaven asserted yesterday during a Gleaner Editors' Forum at the company's North Street offices in Kingston.

The former chairman of the Sugar Industry Authority argued that there were delays in acting on a mid-2015 suggestion for the Government to operate Long Pond in Trelawny. The private owners, Everglades Farms Limited, had indicated their inability to do so, citing the removal of preferential trading arrangements and the fall in world prices.

"We sat on it (the suggestion) like a fowl sitting on an egg waiting on it to hatch without coming to a conclusion. Happily, Mr Samuda has come in and has made a decision quickly," Heaven said.

"Lest there be any misunderstanding, we (cane farmers) squarely want to be associated with the ambassador's remarks," he said.

Subsequent telephone calls from The Gleaner to Derrick Kellier, the agriculture minister in the last administration, went unanswered.

However, Dr Dayton Campbell, opposition spokesman on agriculture, said he was not aware of all the decisions taken last year.

"I wasn't the minister at that time. I don't know what took place in the Cabinet," he said.

Through the JCPS, the Jamaican Government could expose itself to lawsuits if it does not meet contractual obligations to supply sugar to overseas buyers.

Along with that, Samuda told Parliament that in operating the factories, the Government had to take into consideration the socio-economic impact on the livelihoods of thousands of workers.

However, Kenneth Newman, one of Jamaica's largest cane farmers, is urging caution over the decision to open and operate the Long Pond factory for the next three months.

"When I heard Mr Samuda, I was appalled," he said.

The full cost of the support strategy for the factories has not been disclosed; however, Samuda said the bulk of $200 million budgeted last year to process Trelawny canes in St Elizabeth will be used to operate Long Pond.