'Celebration will continue for a long time to come' 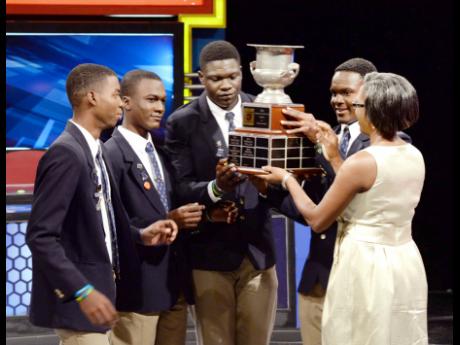 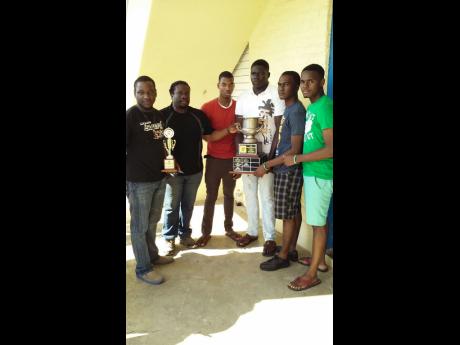 The four boys from the Portland-based school along with their coaches were met by a group of teachers, ancillary workers, and supporters, upon their return yesterday - where commendations, hugs, and kisses were shared among the victorious group.

"I thank the people of Port Antonio, who converged on the National Commercial Bank (NCB) building Thursday night, cheering for us, while watching that big screen," said Chase Roberts, one of the coaches.

"We are well aware that we may rattle some nerves, but the final was not for the faint-hearted. We had only one objective in mind, and that was to win, so as to make the school, the people of Portland, the diaspora, and others islandwide proud of our effort and achievement. Our confidence was high and it paid off," he added.

After leading the first round 11-10, Titchfield lost ground in the speed section to fall behind 25-33, as Campion surged ahead. A deafening silence ensued among the Port Antonio crowd during the buzzer section as Titchfield answered incorrectly to the first two questions. But a late push turned things around for the rural school, which triumphed in the end, 41-39.

"At no time was there any sign of panic among the guys," commented Alpha Sparkes, another Titchfield coach.

"As a matter of fact, they were taught to remain calm amid adversities as, when one is relaxed, the concentration level will be high. The late surge was not anything new for Titchfield as my (our) team functions best when the odds are against us. It is a long overdue victory and the celebrations will continue for a long time to come," he added.

Titchfield, which is located along the peninsula at Fort George Street in Portland, is celebrating 230 years. Already there is talk of a grand celebration, slated for Monday, April 4, following the Easter break, which will include the entire student population.

Team captain Zedan Martin told The Gleaner yesterday that at no time were they bothered by the 37-25 lead held by Campion as they knew that they had it in them and were capable of clawing their way back.

"We were very relaxed," said Martin. "We had worked this thing out over and over that in the event that we fall behind, the best thing to do is to maintain our composure. We did what we had to do, and we are happy with the victory," he added.

For the other team members - Rajae Chambers, Demario Asquitt, and Tajay Edwards - there was never any doubt in their minds that victory would be theirs.

Continuing, Chase said, "The competition was a first-class one, which offers each school a shot at glory. We seized the initiative and it is our hope that this trend of winning will continue. The guys, who are all in lower 6th form, will now change their focus and attention to the Caribbean Advanced Proficiency Examination."