Youth parliament to be reconvened 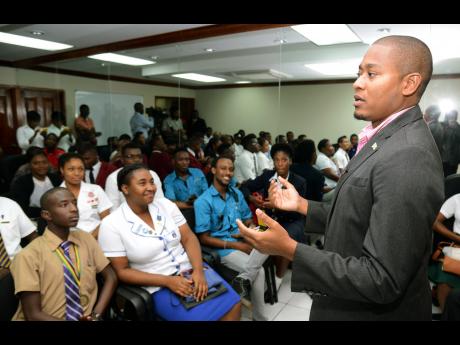 Ricardo Makyn
Minister of State in the Ministry of Education, Youth and Information Floyd Green addressing youth leaders at a youth forum hosted by the ministry yesterday.

Minister of State in the Ministry of Education, Youth and Information Floyd Green has announced that the Youth Parliament is to be reintroduced.

The Jamaica National Youth Parliament was introduced in the early 2000's and formed part of the annual Youth Month activities organised by the National Centre for Youth Development.

Youth parliamentarians were largely groomed and trained by the late Norma Rochester, who conceptualised the National Secondary Schools Debating Competition and was instrumental in the running of the Youth Parliament.

The Youth Parliament, which brought together more than 100 youth leaders from various organisations, was discontinued in 2009 due to what some believe were funding issues.

State Minister Floyd Green, who himself was a member of the Youth Parliament, has, however, said that funding for the annual activity would be prioritised.

"We know that we want to have a Youth Parliament. In terms of how it is to look and how it is to function, we have said to the young people, give us your ideas. So that is the approach we are taking ... . They are going to give me their suggestions and we at the ministry will take those and refine them ... but it is a priority and it is a commitment," he told The Gleaner.

"It should be a real avenue for youth participation and true representation. I hope it will be attended by parliamentarians and that they will listen to the views of the young people," she said.

Kelly has suggested that the Youth Parliament be complemented by a youth council, which would advise the respective ministers.

The state minister has committed to establishing a national youth advisory council.

Javette Nixon, chairman of the Patriots, the young professional affiliate of the People's National Party, has said the reintroduction of the Youth Parliament is a positive move.

"I would like to commend Minister Green and the Government for taking this step," he said.

"It's a position that we have long advocated for long before I was president. We think it is useful to have young people involved in the process and to provide training and motivation to our young people so that they can be a part of the decision-making process in your country, "G2K president Senator Matthew Samuda said.