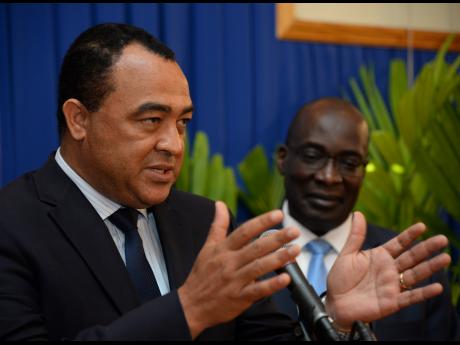 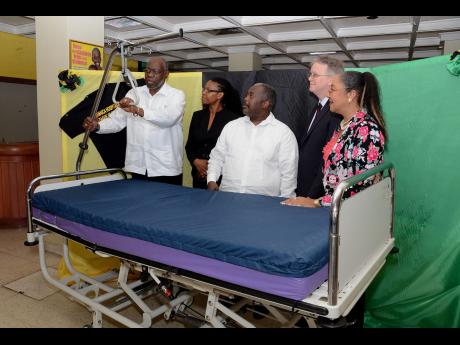 File
In this 2014 photo, then Health Minister Dr Fenton Ferguson (left), examines the features of one of 50 state-of-the-art hospital beds which were donated to the health ministry.
1
2

More than 700 persons who are healthy and able to go home are continuing to occupy beads in public hospitals, putting a further strain on the ailing health sector.

Data compiled by the Ministry of Health shows almost every hospital playing host to persons long discharged but who have remained in the facilities, either because they have nowhere to go or because the hospitals provide free boarding and free meals.

Health Minister Dr Christopher Tufton last week accepted that there is a need to free up existing bed space in the hospitals that are currently occupied by persons who are there, but rightfully should not be there.

"These are persons who either have been abandoned by their families or for one reason or another seem to have nowhere else to go, or in a few cases, it appears they are exploiting the system," said Tufton.

"In some instances, family members refuse to accept these persons after treatment, leaving the responsibility on the State, and in this case the hospitals, to take care of them.

"Hospitals have become infirmaries for long-term stay, providing food and lodging for persons who should not be there. This has negatively impacted the public-health system from responding to many Jamaicans who deserve a bed space due to illness," said Tufton.

He said while the State's approach is first to show compassion, hospitals are a place of safety for all Jamaicans, they are not a place for long-term stay after health issues have been addressed.

"And so we have to find a way to make these beds available to those who need them. We, therefore, need to look at the options available, including transferring these persons to government agencies like infirmaries, if they have nowhere else to go.

"We will also have to collaborate with charities to see if they can be placed in other homes for the homeless. We should also be more strident on family members who rightfully ought to take seriously their responsibilities to support their loved ones.

"While the Government has a responsibility to provide proper heath care for its citizens, it's important that citizens also accept personal responsibility for their loved ones. We must all recognise that taking responsibility for our health and the health of those over whom we have control is critical," added Tufton.

The new health minister's comments echoed comments from the head of the Western Regional Health Authority (WRHA), Calvin G. Brown, more than one year ago.

At that time, Brown told The Gleaner: "We have some patients who have been abandoned by their relatives and have made the hospital their homes ... some of them are here for years, putting an unnecessary strain on the hospital's service," in reference to the Cornwall Regional Hospital.

Today, the problem remains as the health ministry's data shows that 30 of the 417 beds (7.2%) at the Cornwall Regional Hospital are occupied by persons discharged but who have not left the facility.

The situation is similar at other hospitals operated by the WRHA, with 13 of the 164 beds at the Savanna-la-Mar Hospital, 12 of the 111 beds at the Falmouth Hospital, and six of the 38 beds at the Noel Holmes Hospital occupied by persons healthy enough to go home.

At that time, Brown rejected the option of forcefully ejecting persons who were healthy and occupying beds needed by persons who are gravely ill.

"If we should ever exercise the option of forcing out those patients who are well enough to go home to accommodate those who are really ill, I am sure there are persons who would take us to task," said Brown, as he indicated that the WHRA was exploring other options.

But forcefully evicting patients is one option that the administrators at Bellevue Hospital might have to seriously consider as it is faced with the most pressing problem of healthy persons taking up beds.

According to the health ministry's data, persons who are healthy enough to go home occupy 600 of the 784 beds at the mental-health facility.

Other hospitals in the jurisdiction of the South East Regional Health Authority are similarly pressured by healthy patients with 17 of the 455 beds at the Kingston Public Hospital and 11 of the 272 beds at the Spanish Town Hospital being taken up by persons who have been discharged.

The situation is better at the Bustamante Hospital for Children, the National Chest Hospital, the University Hospital of the West Indies, and the island's largest maternity hospital, Victoria Jubilee, where there are no healthy patients taking up bed space.

The data shows that with just over 4,800 beds available in public hospitals across the island, 765 are being occupied by persons who should have been discharged.

A strain on facilities

This is putting a strain on the facilities with doctors, nurses and other hospital staff left to face the wrath of relatives of very ill persons who require bed space on the wards but are left languishing in wheelchairs or on benches for as much as three days on occasions.

"My mother was kept in a wheelchair in the Accident and Emergency (A&E) Department for three days," claimed Desrene Brown, a resident of Montego Bay, in reference to the Cornwall Regional Hospital.

"Just imagine a sick woman in pain being forced to sit in a wheelchair for three days ... it is shameful ... if I could help it, I wouldn't even send my dog up there," added Brown, not knowing that the bed which her mother needed was being occupied by one of 30 healthy patients who have seemingly taken up residence at the hospital.

"It is conditions like these why many of our nurses and doctors are ready to throw in the towel and seek employment overseas," said a doctor who asked not to be named.

"With gunshot victims and persons who have been chopped up and stabbed cramming up A&E daily ... it is not only the relative of patients who are being traumatised daily," added the doctor.