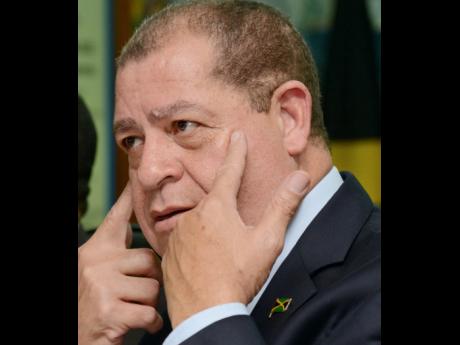 It appears that Finance and Public Service Minister Audley Shaw's explosive announcement that the money collected from a special tax on fuel was placed in the Consolidated Fund instead of a special fund set aside for that purpose should not have been such a shocker after all, in light of deliberations which took place in Parliament late last year.

Shaw and Prime Minister Andrew Holness had given a commitment in the run-up to the February 25 national polls that the money set aside for the oil hedge would be used by the Jamaica Labour Party administration to help fund a new tax policy to provide relief to hundreds of taxpayers.

But Shaw told a Private Sector Organisation President's Forum last week that now that he has taken over the country's purse strings he has found out that the money has been spent or otherwise budgeted.

"We had suggested that part of the payback of the $1.5 million tax break would be use of the tax on fuel that was supposed to be a special fund that was set aside," Shaw told the forum.

"We have found that the oil hedge fund was not set aside, that it is actually already accounted for in the Consolidated Fund," added Shaw.

However, Hansard, the official verbatim records of Parliament, shows that during a sitting of the Lower House last September, Shaw, the then opposition spokesman on finance, was given a full account of what was being done with the money by then Finance Minister Dr Peter Phillips.

"The source of funding for the energy stabilisation and energy efficiency enhancement fund is the new fuel tax that has been imposed since April 2015. In the meantime, while the legislative amendments are

being undertaken, a sub-account of the Consolidated Fund has been established to receive the proceeds of the tax," Hansard records Phillips as saying in response to questions from Shaw on September 29, 2015.

The Consolidated Fund is the principal government account in which revenues are deposited and expenditure financed by way of warrants.

Last week, Phillips echoed that line as he responded to the comments from Shaw about the money from the $7 per litre collected on fuel.

According to Phillips, the Energy Stabilisation Fund was still in the legislative drafting stage up to the point he left office after the February 25 general election.

Phillips said this explained why the Special Consumption Tax (SCT) money was being deposited in the Consolidated Fund.

"We indicated that we were using the funds for hedging and other purposes such as capital expenditures. Cabinet, in September, gave drafting instructions for the creation of a segregated fund, and so that process was under way," added Phillips as he noted that approximately $3 billion from the SCT was used to finance oil hedges in July last year.

According to Phillips, the oil hedges were purchased with advanced sums that were being paid back with revenue from the SCT. Those sums, he said, were not expected to be recovered until this month.

"Everything came through the Consolidated Fund and it could only be spent for the purposes for which it was meant to be spent ... which was to purchase the hedge and, in any event, $3 billion could not account for all that was to be done," Phillips told The Gleaner.

In the meantime, Hugh Johnson, president of the Small Business Association of Jamaica (SBAJ), has declared that its members will be holding the Government to its promise of tax relief for persons earning up to $1.5 million.

"The association is adamant that this tax plan should be rolled out. When they (JLP) were questioned on it they emphasised that it would be done," declared Johnson.

He said the association is surprised at the utterances of the finance minister, that the money he was expecting to fill that gap is not there.

"In many documentation, IMF documentation, presentation by the former minister of finance in Parliament, and even being the head of the Public Accounts Committee of Parliament ... how could you miss that one?

"This one is alarming to us, that after so many presentations and arguments, you are now coming to say you thought it was there. That's a terrible situation to find yourself in as a finance minister," added Johnson.

"We're still looking forward to the increase as was proposed," the SBAJ head insisted.

But Shaw has already declared that the Government is committed to introducing the promised tax measure.

"It is firm and irrevocable, and my commitment is that even if it doesn't start April 1, because of the budgetary process, it will at least be retroactive to April," said Shaw.

Following a three-day Cabinet retreat last week, the Office of the Prime Minister (OPM) quoted Holness as underlining the commitment given by his finance minister.

"We are on track and it will be fully addressed in the presentation of the Budget," OPM quoted the prime minister as saying.

During the election campaign, the JLP had said if elected to form the Government it would remove income tax for persons earning up to $1.5 million.

The party had said this would be financed from a reallocation of revenue from the SCT, improved collection of arrears, additional GCT from new spending, and a natural increase in pay-as-you-earn taxes.