JAMPRO distances self from Ponzi scheme 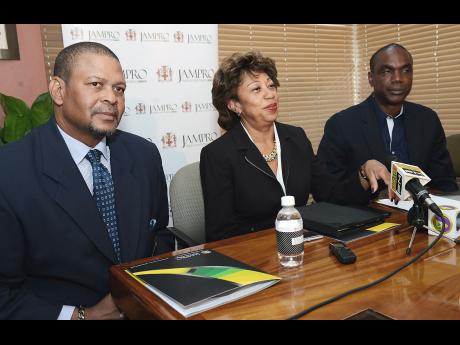 The Texas-based media entity Caribbean News Now and Jamaica Promotions Corporation (JAMPRO) are on a collision course as the news agency's managing editor, Barry Randall, has refused, at least for now, to retract an article it published on April 5, which questioned the local promotional body's involvement in an alleged US$10 million Ponzi scheme that claims to generate profits from "bridge loans" to businesses in Jamaica.

Diane Edwards, president of JAMPRO, yesterday rubbished the report published by Caribbean News Now, declaring that the story was "unfounded and detrimental to our good reputation, and must be retracted".

Edwards told journalists yesterday that JAMPRO had written to the Caribbean News Now editor advising him to "retract and take down the article".

She said that was the first step taken by JAMPRO, noting that the local body would be proceeding to take other steps if the editor did not comply.

Randall yesterday said Caribbean News Now would respond to JAMPRO after its attorneys provided guidance on the matter.

"I am going to keep it (the article) up for the moment," added Randall, who said he had reviewed the report and found nothing defamatory in it.

"They (JAMPRO) don't like the questioning ... but questioning is not a statement of fact. We have a lot of additional information that we have not yet published, but we will," he continued.

Yesterday, Randall questioned why JAMPRO had released a publicity photograph of the businessman accused in the Ponzi scheme with its logo prominently displayed and then subsequently removed it from its website.

When JAMPRO principals were asked a similar question yesterday, Edwards said: "The information about the company (with which the businessman had been associated) was on JAMPRO's website for more than a year ... it was removed when the story came out about (the businessman) because it was felt that there might be incorrect links made with JAMPRO - exactly as has been done.

"The removal was done to protect the reputation from people who may add two and two and get five. There is no acceptance of liability on the part of JAMPRO because we have no dealings with (the businessman) other than he was involved in giving testimonials for a specific purpose at a specific conference and at other conferences and events."