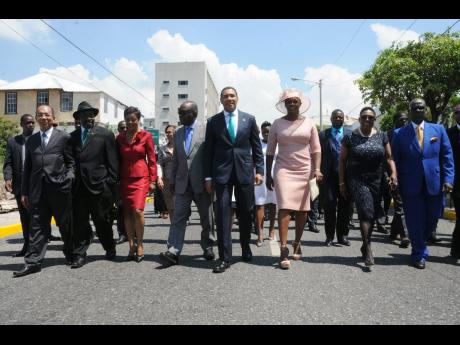 Jamaicans could see an increase in general consumption tax (GCT) and or be required to pay taxes on items now zero rated as the Andrew Holness administration projects to collect $16 billion more in GCT for the new financial year.

At the same time, the administration is also eyeing special consumption tax (SCT) as it forecasts a $5.4-billion increase in the amount it will collect this fiscal year when compared with the 2015-2016 financial year.

The Revenue Estimates, which were tabled in the House of Representatives yesterday by Finance and the Public Service Minister Audley Shaw, show GCT projected to hike from $141.3 billion in the last fiscal year to $157.1 billion this financial year.

The Government is also expected to pull into its coffers $54.4 billion in SCT, up from the $49 billion it collected in the last fiscal year.

Overall, the Revenue Estimates are projecting total tax revenues to increase by $34.5 billion this fiscal year over the similar period last year.

The projected increased amounts to be collected from GCT and SCT might be significant in the administration's thrust to fulfil its election promise of removing hundreds of taxpayers from the tax roll by implementing a tax policy that will see persons earning $1.5 million taking home $18,000 more per month.

However, the then opposition JLP had said it would not increase taxes in order to implement its proposed tax relief to Jamaicans.

Yesterday, Finance and the Public Service Minister Audley Shaw tabled a $580 billion budget for the 2016-2017 financial year, representing a 28 per cent decrease when compared with the $808.4 billion approved in the second supplementary estimates last fiscal year. Last year's original Budget of $641 billion, or 10 per cent more than the current estimates, had been increased in large part as a result of the buy-back of US$1.5 billion in PetroCaribe debt.

Yesterday, Opposition Spokesman on Finance Dr Peter Phillips raised concerns about the Government's ability to deliver on its election promises.

The Fiscal Policy Paper, which was also tabled by Shaw yesterday, stated that the finance minister would outline changes to the structure of Jamaica's income tax as well as adjustments that will be made to ensure that the primary surplus and debt targets are met when he opens the Budget Debate on May 12.

Shaw has insisted that the Government will implement its tax relief promise.

In a Gleaner interview yesterday following the tabling of the Estimates of Expenditure, Phillips argued that the budget on the recurrent side, which includes wages and salaries, does not keep pace with inflation.

He said there are marginal increases on the capital side, which were negotiated by the previous administration, in the reduction of the primary surplus target "which means in effect that a substantial element of the promises that had been made prior to the elections by the Jamaica Labour Party will not be accommodated".

Phillips, however, said he could not give a comprehensive assessment without the benefit of the Estimates of Revenue, which were not yet available at the time he spoke with The Gleaner.

The Fiscal Policy Paper states that when compared with the financial year 2015-2016 provisional out-turn, the allocation in the budget for recurrent spending this year represents an increase of 4.7 per cent, which is marginally below the expected inflation rate for the current financial year.

"This real decline reflects the Government's resolve to contain expenditure as part of the fiscal consolidation efforts to reduce the debt burden and facilitate faster economic growth."

Included in this provision are amounts to meet pension payments of $28.2 billion and travel expenses of $14 billion for public sector employees.

The document says that approximately $2 billion has been provided to meet the second year of the new rates for travel and related allowances and arrears of $800 million to public sector workers covering the period August 2015 to October 2015.

Implementation of the new rates began in November 2015, and the retroactive amount is programmed for payment this month.

The Fiscal Policy Paper indicates that expenditure requirements for financial year 2016-17 are forecast at $502.3 billion, up 0.9 percentage points of GDP (gross domestic product) over the previous year, to 29.1 per cent.

This comprises recurrent programmes of $139.8 billion; compensation of $181.2 billion, including wages and salaries of $170.2 billion; capital programmes of $43 billion; and interest costs of $138.4 billion. "The most significant increase is reflected in capital programmes, which is projected to increase from two per cent of GDP to 2.5 per cent of GDP, arising from the relaxation of the primary surplus target by the International Monetary Fund.

However, debt servicing spiked in financial year 2015-2016 to 58.3 per cent of the Budget due to the Petrocaribe liability-management exercise.

A total of $13.3 billion has been allocated to projects being implemented under the Capital A Heads of Estimates and $29.9 billion to projects that are funded with support from multilateral/bilateral agencies.

The largest share of the capital budget of $11.2 billion has been allotted to the new Ministry of Economic Growth and Job Creation led by Prime Minister Andrew Holness, with the Major Infrastructure Development Project receiving just under $7 billion.

The PetroCaribe debt buy-back had contributed to a $166.8 billion increase in the national budget during the last fiscal year.