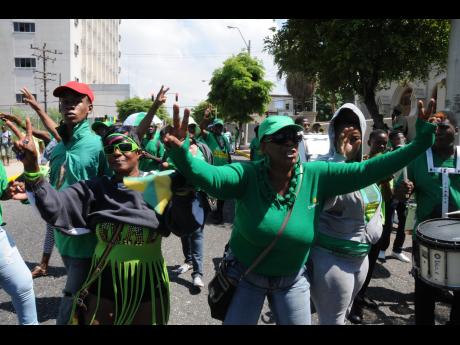 Jermaine Barnaby
Jamaica Labour Party supporters were out in their numbers for yesterday's ceremonial opening of Parliament in downtown Kingston.

The turnout was smaller, the vibe less rampant, but party faithful were still present for the opening of Parliament yesterday.

The security changes, stemming from incidents at the swearing-in of the new Parliament a month ago, dampened spirits somewhat, with both sides pointing to the other as the cause.

Yesterday, Jamaica Labour Party (JLP) and People's National Party (PNP) supporters were divided as though the mighty Red Sea was between them.

JLP supporters said they were not perturbed by the extra distance.

A music truck blared some popular hits, including Mavado's My League and Alkaline's Champion Boy.

They were confident that their party had the plans and the team in place to have a successful run, while mocking the naysayers.

"Watcha now! All a di people who nuh vote fi Andrew Holness, you know wha dem a listen fah right now? One point five," said Shellian Richards, with a laugh, in between sips of Campari and rum, in reference to the income tax plan.

Kerry-Ann, who was equally vocal, said she was out from as early as 6 a.m.

"The PNP dem cannot tek losing. We comfortable yah so. God touch Andrew Holness instead a Portia," she said.

On the other side, PNP supporters were not as pleased with their location. At the swearing-in, they were allowed to stay just below Parliament.

Yesterday, they were some distance further south, at the busy intersection with Sutton Street.

"So why we haffi stay so far?" they asked.

They were no less vocal, asking House Speaker Pearnel Charles about his wig and ribbing policemen that their new security minister was giving them "old car fi drive".

PNP stalwarts heard their cry about the distance.

KD Knight was especially aggrieved, and 'The Sheriff' vowed he was prepared to go to jail to advance his people.

"This is the people's Parliament," he reasoned, to jubilant cheers from the crowd.

After discussions with senior police personnel, the supporters were allowed to congregate close to the St George's Girls' School. Still not where they would have loved, but far better.

After the Throne Speech, those orange faithful who had waited for over two hours in the warm temperatures were rewarded when PNP President Portia Simpson Miller greeted them.