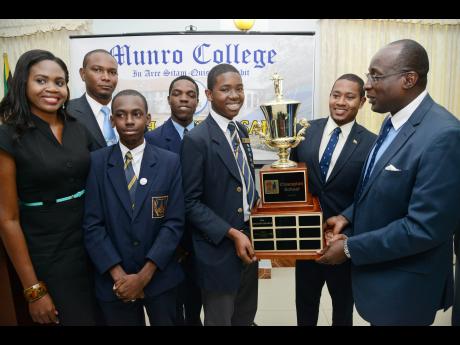 Ahead of the launch of its 160th anniversary, Munro College has asserted its dominance in the Burger King-sponsored National Secondary Schools' Debating Championships.

The all-boys boarding institution defeated long-time rivals Cornwall College and was declared 2016 champion at the studios of Television Jamaica on Wednesday.

First speaker Owayne Honeyghan said that the victory was a special one for the team because it affirmed the importance of debating as an area in which Munro could excel.

"I am really happy that we were given the opportunity to come forward and to analyse issues that are currently facing our society, and we have contextualised it in a way that youths can understand it, and not only youths, but Jamaica at large," he said in an interview with The Gleaner.

Honeyghan also argued for more attention to be given to debating as it is a very useful tool for building confidence and improving the critical-thinking skills of boys in particular.

The other members of the team were fourth form student Nahjae Nunes and sixth-former Mario Plummer Congo-Nyah.

"It feels amazing. It's certainly a dream come true. We put in the work and we were very close in 2014, but we went back to the drawing board and we did it," Blake said.