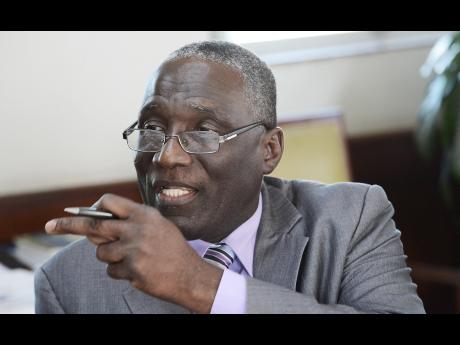 File
Albert Daley: We have developed a proposal and they are favourably disposed to making the funding available to us.

With its role as National Designated Authority (NDA) with the Green Climate Fund (GCF) secure, Jamaica's Climate Change Division is moving to ensure it successfully fulfils the functions.

To that end, the division recently applied to the GCF for financing to boost its capacity to deliver on its mandate as NDA.

"We have developed a proposal and they are favourably disposed to making the funding available to us, but there are some conditionalities that we have to meet," the division's principal director, Albert Daley, told The Gleaner.

It was not clear when the island would receive the official final word from the Fund.

Meanwhile, as NDA, the division serves as the GCF's "first point of contact" for the country while also providing information to local actors on the GCF.

"An important role is not only to provide information re the GCF's facilities, services and offerings for loans and grants; it also has the task of recommending national implementing entities (NIEs), which are institutions through which the GCF channels funds to a country or region and which is given oversight responsibility for the funds," Daley noted.

Already, he said, the division has approached two public entities that could likely fill that role.

"Once we recommend, then the GCF will begin working with the entity we recommend to complete the process of accreditation," he revealed.

With an accredited NIE, the island can go all out to develop proposals for projects that it can itself administer.

"The ideal thing is not for people outside the country to submit proposals on our behalf, but for us to submit our own projects so that whatever returns from them will be in the country," Daley noted.

As NDA, the division also has as its mandate to provide assurances to the GCF that whatever proposals are coming from Jamaica are in line with the island's national priority areas for action, pursuant to its climate-change adaptation and mitigation efforts.

"The NDA is required to submit a no-objection letter to the GCF to say we have no objection, as the NDA, to [any proposed] project going forward because it is a national priority. We are also expected to indicate the extent to which a consultative process was followed in terms of developing the project," Daley revealed.

According to the division boss, there is no question of the value of the step Jamaica has taken in having the CCD so designated.

"If we don't have an NDA, we cannot initiate dialogue or advance any work with the GCF. For a country to engage with the GCF, it is a requirement that they have an NDA. They will only consider a project, for example, if it is endorsed by an NDA; it is a prerequisite for engagement with the GCF," he explained.