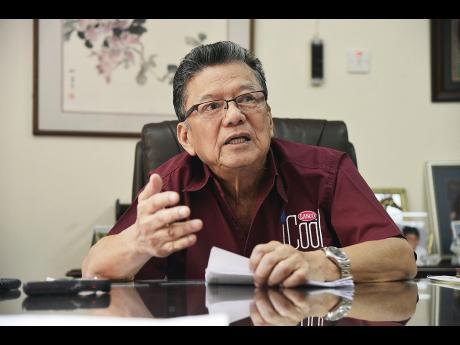 Businessman and philanthropist Lascelles Chin will, on Saturday, receive the American Friends of Jamaica (AFJ) Peacock Award for International Achievement.

Chin is the founder and executive chairman of the LASCO Affiliated Companies, where his pioneering work has earned him admiration as one of Jamaica's and the Caribbean's most distinguished and honoured business leaders.

This international recognition follows an honorary doctorate from the University of Technology that Chin was conferred with last October, among other distinguished accolades.

Through its various divisions, LASCO has touched the lives of Jamaicans in numerous ways, such as making generic drugs available at an affordable cost to Jamaicans, producing nutritious products such as LASCO Food Drink and investing in extensive local product development; as well as providing well-needed foreign exchange through its financial arm.

Each programme receives cash prizes from LASCO for their top three civil servants, amounting to more than $500,000, and support throughout the year for community and developmental programmes, as well as initiatives spearheaded by the LASCO ambassador.

Complementing his love for Jamaica is the support for the environment through the companies-sponsored REAP programme. The Releaf Environmental Awareness Programme targets primary schools across the island, promoting the environment, and emphasising recycling, tree planting and conservation.

Beneficiaries of the public-sector programmes have lauded Chin for his work, and have extended congratulations to the businessman on his recent recognition by the AFJ.

The AFJ works with a broad coalition of Jamaican organisations and stakeholders to bring about change in the lives of Jamaicans in need.

Since its founding 34 years ago, the AFJ has distributed almost US$13 million in health care and education grants, disaster-relief aid and scholarships.