PNP not being hard on Gov't - Simpson Miller 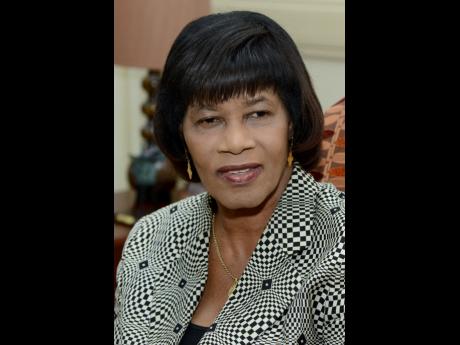 Opposition Leader Portia Simpson Miller is claiming that her People's National Party (PNP) is not being "hard" on the one-month-old Andrew Holness administration, which is coming under increasing pressure over whether it can fulfil its anti-austerity mix of election promises.

The opposition leader was addressing a PNP press conference yesterday, the first since the tabling of the $580-billion Budget for the 2016-2017 fiscal year.

Simpson Miller and party officials Anthony Hylton, Dr Peter Phillips, and Peter Bunting ripped into the Government, questioning the credibility of the Budget while maintaining their view that the suite of election commitments "will not be met".

"I don't feel so!" Simpson Miller answered when questioned on whether the Opposition was being hard on the Government.

"We have a responsibility to defend the rights of all Jamaicans. We are not hard on them. What they need to do is to get on with the job. There are some people that love to talk, and they'll talk and talk and talk. But I love to see talk being matched by word on the ground," she added.

Earlier, she unleashed a scathing critique of the administration, saying the Estimates of Expenditure showed a continuation of the "legacy" of her administration, which was relieved of state power following the February 25 general election.

According to her, the Jamaica Labour Party, which took power less than a month before the usual tabling of the Budget, lacks new ideas.

"From the Throne Speech, it is clear that despite their many election promises, the Government has created few policies and programmes. The Throne Speech and the Estimates are major endorsements of what we did in Government. They are continuing our policies," Simpson Miller argued.

Curiously, however, Simpson Miller added that "the Throne Speech and the Budget Estimates, so far, show that the Government has no clear idea or plan for economic management, growth and sustainable development".

"We reject that notion. It is so premature. We have not even commenced the Budget Debate, and I really don't see how we can be arguing about continuation of policies," Reid told The Gleaner.

"I implore Jamaicans to listen to the delivery of the programmes and activities."

Meanwhile, on the subject of Jamaica's finances, Phillips, spokesperson on finance, said he believed the viability of the Budget was threatened based on the $459 billion allocated in recurrent expenses.

"In real terms, this Budget is somewhere between eight to 10 per cent smaller than the original Budget (approved) last year. It includes three per cent for wages and salaries and it projects five per cent for inflation," Phillips said.

He argued that the inflation and wage demands will result in the Government buying 10 per cent fewer services and goods than last year, which, according to him, will affect key national interests.

"It reverses a pattern which was established to expand on the delivery of government services. It means that they won't be able to provide the same services as far as purchasing gas for police vehicles or equipment necessary for the security forces. The same applies in relation to education and justice," he added.