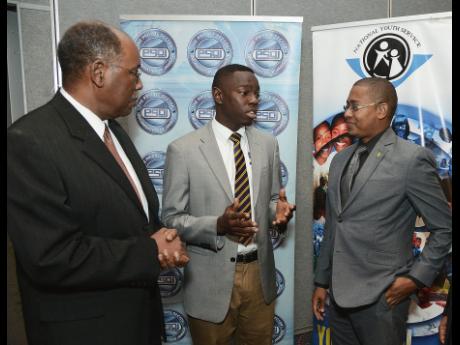 Ian Allen
Benjamin Fraser (centre), National Youth Service (NYS) participant and student of Ardenne High School, explains the benefits of the NYS to Floyd Green (right), state minister in the Ministry of Education, Youth and Information, and Dennis Lawrence, NYS executive director, during the launch of the NYS Summer Programme at The Jamaica Pegasus hotel in New Kingston yesterday.

Floyd Green, state minister in the Ministry of Education, Youth and Information, is calling for the private sector to assist the National Youth Service (NYS) in meeting a target of placing 6,000 young people in summer jobs.

Addressing the launch of the NYS summer programme, Green said businesses that take on summer interns are doing a valuable social service.

"I encourage members of the private sector to continue to increase employing the summer interns," he said.

"We all know we have a youth unemployment problem ... and the adage is true, the devil finds work for idle hands, and it is so unfortunate to see a number of young people in that summer period get themselves up to wrongdoing. Let us put them to work," he said.

According to Green, the summer employment programme plays a critical role in not only preparing young people for the world of work, but also for entrepreneurial pursuits.

The NYS has registered gradual improvements in the number of participants in the summer programme since its introduction in 2011.

Last year, the agency placed 5,200 interns and has been challenged by the youth minister to meet a target of placing 6,000 interns in this year's instalment of the programme.

"This Government is serious about putting young people to work," Green said as he explained initiatives that will be pursued to address youth unemployment.

NYS Executive Director Denis Lawrence said the service has been able to increase the number of placements for the summer programme because of its partnership with the Private Sector Organisation of Jamaica (PSOJ).

Green, in highlighting the support of the PSOJ, expressed confidence that the target of placing 6,000 students would be met.

"I want to thank the PSOJ because there is no way we would achieve any of this without significant partnership."

Dennis Chung, chief executive officer of the PSOJ, affirmed the group's commitment to facilitate the employment of young people through the NYS summer programme.

"At the PSOJ, we do a lot of things, and I thought it was important for us to become involved in this."