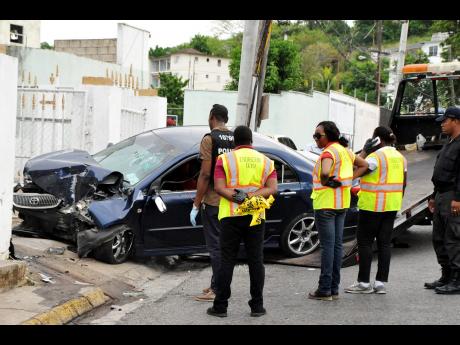 Crime scene investigators examining the car in which the four gunmen, who challenged them in a high-speed chase and gun battle in Montego Bay were travelling before it crashed in a wall.

One man was shot and killed and two illegal firearms seized in Montego Bay, St James, early yesterday following a high-speed chase and a shoot-out between four gunmen travelling in a blue Toyota motor car and a police patrol, which tried to intercept them.

"It was a real drama out here this morning," said a woman who claimed she was forced to take cover as bullets flew along Cottage Road in the western city. "If the police were not brave, the men would have got away."

According to reports, shortly after 5 a.m., a police patrol, which was carrying out an early morning spot check along Cottage Road, signalled the Toyota motor car with four men aboard to stop. The driver disobeyed the order and increased his speed, with the police giving chase.

On negotiating a corner on Cottage Road, the car got out of control and crashed into a wall. Three of the occupants reportedly alighted and engaged the police in a running gun battle. During the exchange, one of the gunmen was shot dead while the other men made good their escape.

"When we went to check out the car, we found the driver still inside suffering from injuries sustained in the crash," a policeman told The Gleaner. "We recovered a handgun from the man who was killed and we found another handgun in the car."

The injured driver was taken to the Cornwall Regional Hospital, where he was admitted under police guard. The crashed vehicle was subsequently taken away from the scene on a wrecker.

In the aftermath of the shooting, a large crowd, primarily made up of schoolchildren, converged on the scene as police investigators processed the wrecked car and marked the locations where spent shells had been found.

During a mini Gleaner forum last week, Senior Superintendent Steve McGregor, the commanding officer for St James, said the police would be stepping up patrols in an around the city with a view to intercepting armed criminals.