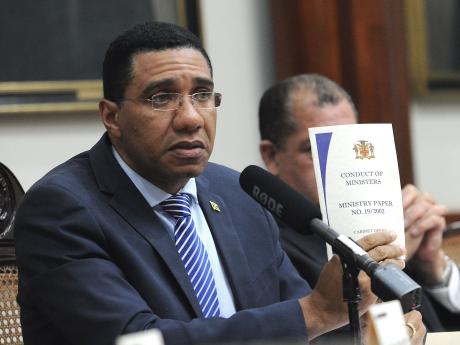 Ricardo Makyn
Prime Minister Andrew Holness with the Code of Conduct for Cabinet ministers at the first Cabinet meeting after the JLP was elected to form the government.

Almost two months after they were sworn into office, the 17 members of Prime Minister Andrew Holness' Cabinet have not been given their job letters, which are expected to be used to gauge their performances.

During his campaign for the job to lead the country's affairs, Holness had vowed that if the Jamaica Labour Party (JLP) was elected to form the Government, his ministers would be given clear performance targets with deadlines as to when they should be met.

"All ministers under the new Jamaica Labour Party will be given a job letter," declared Holness at a Gleaner-Mona School of Business and Management Leadership round table.

"That job letter has a timeline of two years and six months from the date of their appointment, with key performance targets which are agreed upon by the Cabinet," added Holness, as he warned that there would be consequences for non-performance.

At that time, Holness declared that everything done by the members of his Cabinet must lead towards economic growth and job creation.

"Failure to achieve those specific targets within the period is consequential," warned Holness, as he added that Cabinet members would also be the recipients of a 90-day target in the first instance.

But checks by our news team last week showed that the ministers, who were sworn in on March 7, had not been given their job descriptions.

Sunday Gleaner sources had indicated that the ministers would have been given their job letters during the first Cabinet retreat, which was held some two weeks ago, but with issues related to crafting the Government's first Budget dominating the discussions, this was put on hold.

"The prime minister intends to make good on his promise but wants to give people reasonable and attainable objectives," said a source close to the administration then.

According to the source, some Cabinet members have been assigned some targets, which are low-hanging fruits.

Robert Morgan, director of communications in the Office of the Prime Minister, echoed this position last week.

"The constraints of the Budget are of such that the energies of the Government and the prime minister are focused on that. I will say it (job letters) will be done, but I cannot give a timeline," Morgan told Sunday Gleaner.