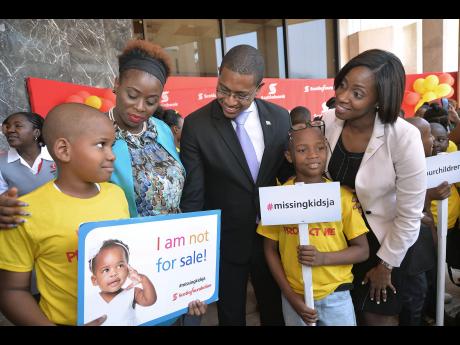 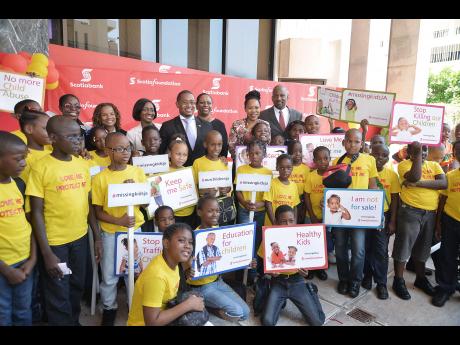 Child Month, which turns the spotlight on the nation's children, is only two days away, and what should be pleasant thoughts of achievement and planning could well be derailed by trauma that the children have been suffering as their blood stains the society.

Yesterday, the Scotia Foundation launched its Child Month activities, but the death of two children this week cast a shadow over the proceedings.

The deaths of three-year-old Lashaunie Thomas and 13-year-old J'Quan Forbes followed each other in quick succession this week.

It is this painful reflection that has occupied the mind of Minister of State in the Ministry of Education, Youth and Information Floyd Green since he learnt of the unfortunate circumstances under which both children met their untimely demise.

"I stand here with a heavy heart, I must admit. Watching the news last night was very,very difficult," he said as he addressed a gathering at the Scotia Foundation launch of its Child Month activities.

The item of news regarding Lashaunie Thomas, the three-year-old girl found dead on the beach in Montego Bay, was almost too much for Green to bear.

"My heart goes out to the family in Montego Bay with the death of that three-year-old, and you could see the pain and feel the pain of the family members," he said.

Green disclosed that Child Development Agency (CDA) Chief Executive Officer Rosalee Gage-Grey has activated the response of the CDA, which has begun providing counselling for members of the family.

"When I spoke with Mrs Gage-Grey this morning, she told me it was very hard because the officers could not speak with the mother because she was inconsolable," he added.

Green further made a passionate plea for the police to fully investigate the circumstances that lead to the death of the three-year-old.

"I expect that the police will leave no stone unturned to bring the perpetrators to justice," he said.

Turning his attention to the alleged suicide of Wolmer's Boys' student J'Quan Forbes, Green said, "I am also very broken-hearted about the news of the child from Wolmer's. That again is very, very sad. Any life, but the life of the child must take special place in our hearts," he said.

Green has indicated that he wants the police investigations into the death of both children to be given the utmost priority.

"There must be no doubt in anybody's mind that when a child's life is taken, nothing will be left undone to ensure that we know what happened and that justice has been done," he said.