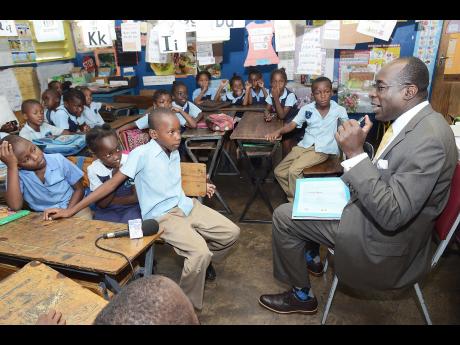 Minister of Education, Youth and Information, Senator Ruel Reid, is of the view that unidentified special needs among students have impacted Jamaica's ability to achieve a literacy rate of 100 per cent.

"One of the things I have asked the ministry to do is a little more research into the level of special needs in the system, because when we did the task force report, there was about 24 per cent of the population at the time that had a serious cognitive deficiency. So, to the extent that we reached with all intervention, 85 per cent, tells me that we still have some issues with special needs," he said yesterday, after reading to children at Chetolah Park Primary School for Read Across Jamaica Day.

The education ministry last year announced that Jamaica achieved the target of an 85 per cent literacy rate.

According to Reid, the target of 100 per cent can be achieved through early interventions.

"That is one reason for the early childhood policy which I will be discussing with the ministry. As I look at the numbers, 85 per cent is not really where we want to go, but the reality is that there is obviously a gap and it tells me that we have more special needs in the system than we probably have been able to deal with," he said.

Reid disclosed that he has asked the ministry to look at how the country can develop a programme for children three years old and younger. This, he said, was necessary to identify and provide interventions for special-needs cases early.

The education minister pointed out that the early intervention programme being considered by ministry officials will be done in collaboration with the Ministry of Health.

"I have already been speaking to the Minister of Health for us and the ministry to work together so that every child that is born in Jamaica, we are going to capture them in terms of a database and work with those mothers to make sure there is proper nutrition, simulation that needs to take place, early detection to see if there is any abnormality in terms of their mental development," he added.