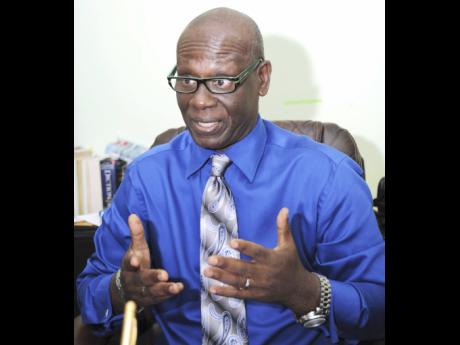 Minister of Local Government and Community Development Desmond McKenzie has ordered an investigation into the circumstances that led to yesterday's collapse of decking at the Blue Diamond Royalton hotel construction site in Negril, Hanover.

The collapse left five construction workers injured, and at least one trapped in rubble for hours before being rescued.

Pointing to what he said were concerns about breaches of permits granted by the Hanover Parish Council, McKenzie instructed the council to issue a stop order that is to remain in effect for at least 30 days.

The local government minister said a three-man technical team has been established to investigate the incident and he has requested that a comprehensive report be submitted to him later today.

Occupational-safety inspectors from the Ministry of Labour are to also conduct an investigation into the health and safety standards on the site.

Even as investigations are launched into the collapse of the building, chief executive officer of the Jamaica Environment Trust (JET), Diana McCaulay, has cited long-standing concerns about the construction of Royalton hotels in Jamaica.

"My concern remains that we have an investor constructing a hotel with an environmental permit that it is substantially in breach of ... . I do not understand why investors are allowed to break the law," she told The Gleaner yesterday.

McCaulay also said concerns about construction occurring during odd hours of the night were passed on to the National Environment and Planning Agency (NEPA).

Using the Access to Information Act, her environmental group sought and received post-permit monitoring reports done by NEPA for the Royalton Hotel Negril construction and found a number of breaches that are detailed in a JET review report published two months ago.

According to the JET report, NEPA inspections, conducted in January, found that the Royalton Negril development was in contradiction with approved drawings.

"There were blocks being erected with deviations from what was approved, to include number of rooms per floor, breaks between blocks and building outline and layout. For example, the ground floor of blocks 1 & 2 showed 12 rooms on the approved plans, but 14 were constructed, which would constitute four additional rooms per block if the number of floors is maintained," the JET report said.

According to the report, of the 11 plans/drawings that ought to have been submitted for approval either before or after commencement of development, nine had not been submitted despite construction being well under way.

While the group acknowledged that NEPA issued warning notices to the developers, it argued that not enough enforcement was being done by the agency.

"NEPA's willingness to enforce sanctions for breaches continues to be of concern, as the permittee has been allowed to continue development despite the blatant disregard for the conditions in the permit. It is clear that more needs to be done than simply issuing warning notices regarding the same breaches," the report said.